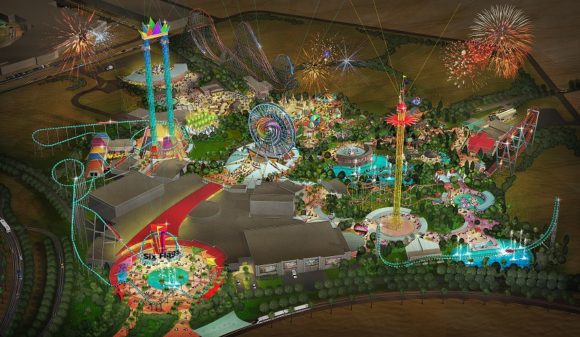 Six Flags Dubai will feature themed zones named in tribute to some of its most famous amusement parks in the United States, it has been revealed as construction begins on site at Dubai Parks and Resorts.

Planned to open in late 2019, the AED 2.6 billion ($710m/€530m) park will include 27 rides and attractions spread across six zones: Thrillseeker Plaza, Magic Mountain, Fiesta Texas, Great Escape, Great Adventure and Great America. All but the first are also the names of Six Flags parks in the US.

Featured as the fourth park on site at Dubai Parks and Resorts (following Legoland, Motiongate and Bollywood), Six Flags Dubai will include at least three world record-breaking rides amongst six rollercoasters, four aerial attractions,and a 350m-long river rapids ride. Also featured will be three performance spaces, 16 F&B outlet and 16 retails outlets. In total, 32.5 hectares (3.5m sq ft) has been allocated to the project, around 18 hectares (2m sq ft) of which will be developed in phase I.

“We are delighted to announce that construction has commenced on the region’s first Six Flags branded theme park,” conforms Dubai Parks and Resorts CEO Raed Kajoor Al Nuaimi. “Six Flags is a very successful brand in other parts of the world and the introduction of this exciting theme park will further establish Dubai Parks and Resorts as the region’s largest leisure and entertainment destination.”

Update: FORREC has been confirmed as lead design consultant for the park. More info here.