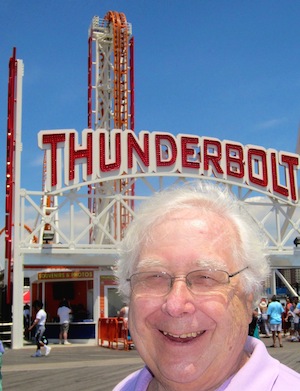 It had been two years since I last visited Coney Island, birthplace of the outdoor amusement industry.

Luna Park had opened, and the future appeared promising for this section of New York City. But that’s not saying much, because Coney Island had become blighted. The streets were dirty and the crowds were tough. Then in late October 2012, Hurricane Sandy struck and added to the turmoil.

But looking back today, Sandy may have been a blessing in disguise. It forced the Coney Island Development Corporation, a New York City municipal entity, to step up and help local park operators to clean up and fix up from the storm. Sandy destroyed some old (and dingy) attractions, and in their place came some new and improved ones.

Case in point #1: Deno’s Wonder Wheel Park is home to Spookarama, a once-quirky dark ride. For years it had been promoted as the world’s longest dark ride, and it was. But 90% of the ride was in daylight, and once entering the 10% that was dark it was just, er, dark. A few of the gags inside worked, but they got washed away by Sandy. Today’s Spookarama has been shortened, travels mostly in the dark, and all the gags are fresh and operating. Once again it’s an entertaining dark ride. See it for yourself here: youtu.be/WL5pbnyfHEc

Case in point #2: The historic Bishoff & Brienstein Carousell (B&B for short), in danger of

being dismantled and sold from its former aging home on Stillwell Avenue, was purchased intact for $1.8 million by the City’s Economic Development Corporation, which also paid for its restoration by Carousels and Carvings in Marion, Ohio. The B&B was built in Coney Island, with a frame dating to 1906. In the early 1920s it received a new set of horses carved by Charles Carmel. Now fully restored, this piece of spinning art operates in a bright new carousel building in Steeplechase Plaza on the Coney Island boardwalk.

Case in point #3: The City continues to lease open pieces of land to Luna Park operator Central Amusement International (CAI), controlled by Zamperla. This year CAI has opened the Thunderbolt steel looping coaster and the first custom coaster to appear at Coney Island for over 80 years – as seen above. The ride’s cars each have a capacity of nine passengers, seated in three rows of three. I don’t quite understand this ménage à trois seating arrangement, but CAI president Valerio Ferrari assured me that “the three seats per row account for smaller families in certain areas of the globe, specifically Europe and China.” This got me thinking about all the families I know who ride coasters with their children. I’m still thinking …

With shiny new rides, a restored boardwalk, clean streets, and new buildings on the boardwalk, the former tough crowd is gone. The demographics I found at Coney Island has changed, and these are demographics any park operator would welcome. Coney Island is enjoying a renaissance. Families with children are now visiting the parks, riding the rides, strolling the boardwalk, bathing in the adjacent Atlantic Ocean, and frequenting the local restaurants and businesses. It’s a remarkable turn-around, one that both municipal and private partners can take pride in.

How was business this season?