This festive season the owners of Sundown Adventureland in England spent over a million pounds erecting a dark ride that operated for just six weeks and will have closed by the time you read this. Owen Ralph was there to enjoy A Night Before Christmas.

Described by those in the know as ‘Britain’s best kept secret,’ Sundown Adventureland is a charming park with an eye for detail, putting some of its larger counterparts to shame. Over a period of four decades, it has developed without a masterplan and now attracts over 200,000 visitors a year to the village of Rampton near Retford, Nottinghamshire. Pitched as “the theme park exclusively for the under 10s,” it is similar in content to the Gulliver’s chain of parks or perhaps a German “Märchenwald” (fairytale forest), but welcomed its first paying guests back in the ’70s as a very humble animal attraction.

“It started as a hobby,” recalls park owner and director Audrey B Rhodes, known to her friends and colleagues simply as Mrs Rhodes. “I had a lot of pets in the house; monkeys, bush babies and flying squirrels. We used to grow vegetables and sell them, we had chicken sheds too, but people would come and see the monkeys, so I decided to charge them six pence to get in. Then they wanted to go on our children’s swings outside, so we put bigger ones in. About 20 years ago we started adding rides.”

The original Sundown Pets Garden (Sundown was the name of the family bungalow) covered two-and-a-half-acres (one hectare). Today Sundown Adventureland occupies a 40-acre site and employs up to 80 staff in high season, including Mrs Rhodes’ daughter Gaynor, her son-in-law Wayne, grandson Shaun, step-grandson Blake, and several other family members.

Scenic rides featuring popular tales and storybook themes form the backbone of the park’s offering, combined with themed play areas and push button displays and animationatronics. The animals, alas, are a thing of the past.

“We used to have a big aviary,” says Mrs Rhodes, “but now it’s Monkey Mischief. They are not real monkeys but they work really well! It got awkward keeping animals because of people having to wash their hands and all the rules and regulations.”

Complementing the park’s main season, which runs mid-February until mid-November, is Sundown’s “Xmas Spectacular.” Although most of the rides and attractions remain open for this festive finale, the focus is on the Market Square, which comes alive with lights, decorations and seasonal food and drink. During this year’s event (November 13 to December 24) children could enjoy park entry plus the new Christmas dark ride and a gift from Santa for £9.50 ($14.00/E11.50), the same price as regular admission. 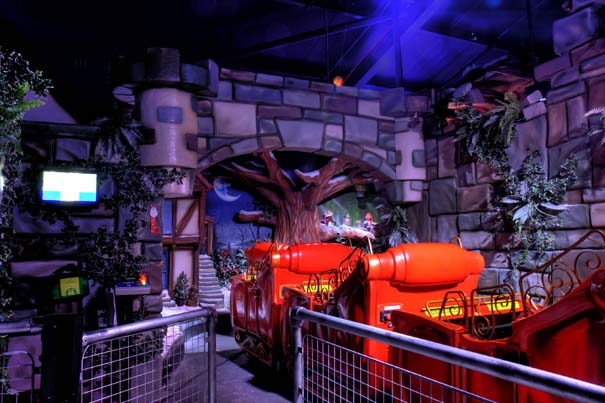 A Night Before Christmas (Pictured above and below) has been in planning for several years and supersedes Santa’s Sleigh Ride, Sundown’s existing Christmas-themed dark ride, which operates year-round. Housed inside a 40 x 50-metre purpose-built building, the new ride is the first attraction to use a wireless and “trackless” transport system by Garmendale Engineering Ltd (GEL) and features theming inside and out by KD Decoratives. The two companies are long-time suppliers to the park, which has a record of buying British wherever possible. Others whose work can be found at Sundown include the theming firms Farmer Studios and Meticulous.

Based around an hour away in Ilkeston, Derbyshire, GEL also supplied the ride system for Rocky Mountain Railroad, Robin Hood’s Merry Adventure Ride and the Sundown Tractor Ride, the latter themed by KD, which also themed and installed the Crash Landings café and indoor play area, Monkey Mischief and various other animatronics and theming throughout the park.

“It feels sometimes like I spend half my life here,” says KD project manager Paul Rowden.

“Make yourself a drink, you know where the kettle is,” replies Mrs Rhodes, suggesting he actually does.

The relationship becomes even cosier when you learn that Mrs Rhodes’ son-in-law Colin now works for KD at their Huddersfield headquarters. On A Night Before Christmas, the company designed and fabricated the rides’s 11 scenes, including all moving figures.

“My idea,” explains Mrs Rhodes, “was that they should be like pantomime scenes; all the characters are supposed to be getting ready for Christmas, hanging out their stockings and having parties. I just didn’t want it to be the same as everyone else with gnomes and reindeer.”

Was she tempted to make it interactive? “I think you miss a lot of the scenery when you do, however it’s something we might look at in future, with cameras instead of guns because I don’t want children shooting things. They can still hit the target, but in a different way.”

Sat inside GEL’s four-seater Magtrak ride vehicles, riders travel along almost 65-metres of track, following a magnetic path. The attraction features two sections where the car spins on the spot and, unusually for a dark ride, passengers embark and disembark from opposite ends of the building (the full loop is actually 98-metres). This is because A Night Before Christmas is essentially a feeder for the park’s four Santa Clauses (sorry kids!), who can be found in separate rooms at the end of the ride. Before children get to meet their Santa, an assistant sends details of each child’s age and gender via a touchscreen display to the elves’ workshop so a suitable gift is ready waiting for them.

A Night Before Christmas is an effective crowd control tool that helps alleviate the queues that used to form for Santa Claus. Visitors are encouraged to pre-book slots on the ride via Sundown Adventureland’s website to ensure minimum waiting time when they arrive at the park.

“It’s no fun queuing outside for two hours at this time of the year,” says Mrs Mrs Rhodes. “The online bookings have been brilliant and apart from the first weekend it’s worked really well. We tell families if they come before their time they will not get on and have to wait.”

The biggest challenge during this year’s Xmas Spectacular was the weather, which was just a little too, er… Christmassy. Despite strong pre-bookings, the snowy conditions seen on our photos kept some families away, and management was decding best how to accomodate the disappointed guests. Whatever happens, A Night Before Christmas will not feature as part of the line-up when the park reopens in February.

“We were going to keep it open all year, but Gaynor thinks it will loose its appeal and stop people coming back if they’ve already seen it in the summer,” says Mrs Rhodes. “We’ve still got the old Christmas ride, which we were going to pull down this year but people say they still want it, so we will have to decide whether to renovate it or whatever, I don’t know; it’s getting a bit tatty.”

Although no major new attractions are planned for 2011, the next priority will be a new entrance as the current one, a little like the park’s website, sells Sundown short.

“We are not very professional!” laughs Mrs Rhodes. “Everyone says we should advertise more, maybe we should. I don’t believe in all these cut-price tickets though. I know one park who tried but people who had paid full price were grumbling because they couldn’t get on the rides and there were so many people there. They’ve gone out of business now.”

Maybe Mrs Rhodes and her colleagues are afraid to push themselves too hard for fear of being overrun with guests and spoiling the park’s family atmosphere. Perhaps to some extent they enjoy that “best kept secret” status, so long as the regulars keep returning, which they do, again and again. Yet some secrets deserve to be shared, which is why Park World is happy to spread the word. 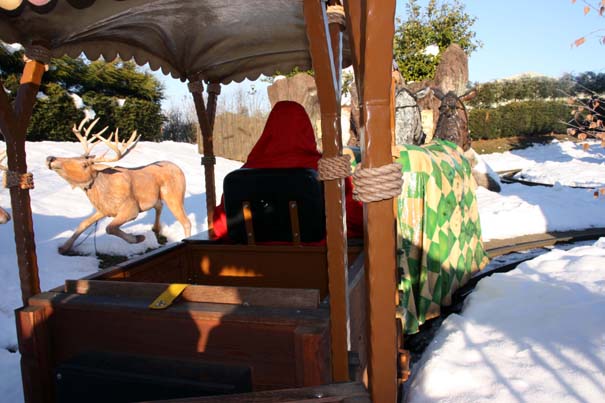