CEO of Grupo Xcaret recognised at HOLA Conference in Miami 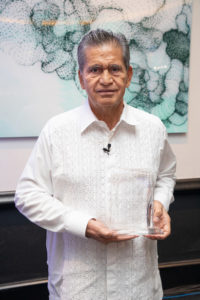 Quintana began to look at the environmental impact of tourism infrastructure as far back as the mid-1980s, when the architect and former furniture salesman first acquired five hectares (12 acres) of coastal land in Riviera Maya, Quintana Roo, to develop what became Xcaret Park. The area was known at the time as “Rancho Xcaret,” and was remarkable for its natural beauty and biodiversity as well as its history. In ancient times, it was the Mayan port previously known as Polé. Quintana’s original plan had been to develop the area as a private retreat for his family, but on discovering cenotes, underground rivers and other unique natural structures, he worked with Constandse brothers, who owned the land, to create Xcaret, which opened in 1990 as a park, later adding several other parks and most recently  Hotel Xcaret Mexico.

During his acceptance speech, Grupo Xcaret CEO Miguel Quintana Pali said, “At Grupo Xcaret, we are constantly searching for aspiration, quality and uniqueness, and we keep our standards very high in order to provide our guests with the best possible experience.” He then added, “We noticed our guests were demanding more than just sun and beach; other hotels did not offer a complete vacation experience, and that’s part of the success story for Xcaret park. Grupo Xcaret has a wide-range of attractions, and with the opening of our first hotel, we are able to capitalize on our unique All-Fun Inclusive concept.”

The Hotel Opportunities Latin America Conference is the highlight of the year in the Latin American hotel investment community, attended by hundreds of participants interested in conducting high value deals in one of the world’s hottest hotel markets. Many delegates are C-Suite level executives, and during the 2018 conference one out of three delegates held the title of Chair, CEO, President or Owner. Each year, HOLA has an important honoree, someone who has distinguished through great accomplishments, earning the group’s admiration.

Jeff Highley, President of the BHN Group and organizer of the HOLA conference said, “It is not common to find a person who takes his passion and makes it his life, while serving others and allowing his collaborators to enjoy it,” referring to Miguel Quintana. “He is a nature advocate, innovator and fine hotelier who clearly loves his country, a true patriot. He has approached hospitality putting people first and the way he has embraced those elements of giving back to humankind is what this Lifetime Achievement Award stands for,” Highley added.

The HOLA award is among many over the years Quintana Pali and his work at Xcaret have received. Late 2018, IAAPA, the Global Association for the Attractions Industry, gave an Applause Award to Xcaret and Quintana. The biannual award recognizes the world’s most elite attractions whose management, operations and creative accomplishments have been achieved with forward thinking, originality and sound business practices. Additionally, Miguel Quintana was named one of the top 2018 influencers in the theme park industry by Blooloop, the world’s leading online resource for professionals in the visitor attractions sector. The Applause, HOLA awards and other recognitions come at a time when Xcaret is set to welcome its 50 millionth visitor.

US and Canada Waterpark and Resort Trends 2019