Mondial, the Dutch ride manufacturer, is to supply four WindSeeker rides to the Cedar Fair chain in 2011, each towering over 300ft (91.7-metres) tall.

Each attraction will comprise a 301ft-tall tower with 32 twin-seat swinging cars. Riders’ legs will dangle free as the cars slowly begin rotating around the outside of the tower. The main passenger unit then climbs up the tower. At the top, the cars will reach speeds between 25-30 mph (40-48km/h), flaring out almost 45 degrees from the tower.

“Due to the long airtime, riders will experience a spectacular sense of weightlessness,” notes Marty Keithley, general manager at Knotts Berry Farm. “This, combined with the fact that riders legs will be unrestrained, will create a sense of exhilaration which will enhance the feeling of free flight.”

At Knotts the ride will be located on the current site of the park’s Sky Cabin observation tower, with groundbreaking scheduled for this autumn (fall). At Canada’s Wonderland, WindSeeker will be 70ft (21.3-metres) higher than the park’s existing Drop Tower and Behemoth coaster. Kings Island’s ride will be located in the Coney Mall section of the park near the exit of Vortex.

Over at Cedar Point, WindSeeker is expected to evoke the spirit of a ride that operated in the early 1900s at Cedar Point Beach. One of the most popular attractions at the time was the Sea Swings that would dip riders into the cool waters of Lake Erie as it spun in a circular motion. WindSeeker, which will be only a few feet shorter than the lifthill on the park’s Millennium Force coaster, will replace Cedar Point’s Ocean Motion swinging boat ride, which is currently available for sale.

Each WindSeeker will seat 64 passengers, who must be at least 48 inches (1.2-metres) tall to ride, secured with individual over-the-head lap bars with interlocking seat belt. Unlike some similar rides featuring chains, the Mondial constructions can still operate in relatively high wind speeds thanks to their solid arms, hence the ride’s name. Each is expected to cost around $5 million to install.

Pictured above: WindSeeker at Cedar Point. Below: Cedar Point at Canada’s Wonderland. 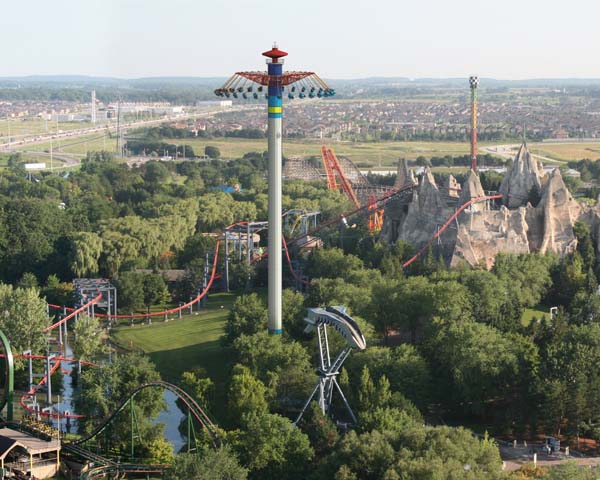