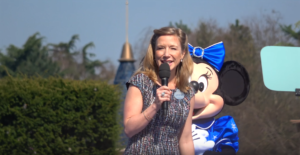 Powell will oversee the Disneyland Resort in California, Walt Disney World in Florida, and Disneyland Paris, continuing with her current duties until a successor to her post is announced.

The Walt Disney Company is currently undergoing a restructure, echoing what has been a successful management restructure for Eastern division of the parks.

“I wanted to thank everyone for their kind congratulations,” commented Powell. “My role is expanding as I take on the running of the parks in California and Florida in addition to Disneyland Paris. I am moving but not leaving! I am and will always remain attached to Disneyland Paris.”

Powell was named president of Euro Disney S.A.S in July 2016 after a 12-year career within the company, and during her time at the park oversaw the completion of a revitalisation project, park expansion, as well as a £2bn transformation of Walt Disney Studios Park.