“A lot of parks have stopped running games now because of staff fraud,” reports the Amusement Corp’s David Miller. The Australian company has released a new midway game that it says will increase takings …then stop them drifting away into employee’s pockets.

Using a tried and tested theme, Catch A Fish looks simple enough, but behind it all is software that ensures operators keep a firm grasp on the game’s profitability and stock control.

Players use a net to catch a fish from the pool and then “weigh” it in the scales held by a friendly fisherman. This tells them the weight/score of the fish, and a prize is dispensed of corresponding size.

A computer chip inside each fish helps the operator record exactly how many prizes were dispensed, and at what level. It’s therefore very easy to prove what the takings should be at the end of the day. Even is a fish is scanned twice by mistake, the system cancels out the second instance. 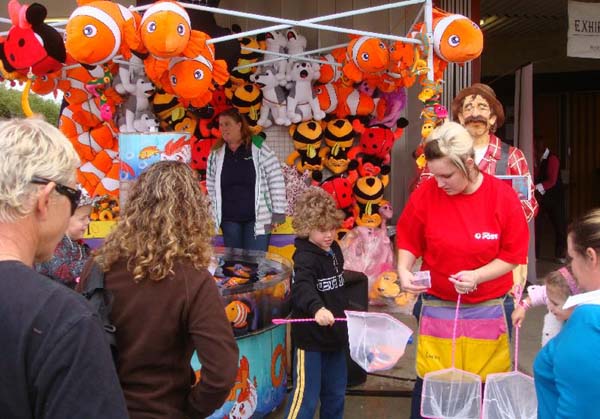 Once the fish is put back into the water, it is reprogrammed ready for a new game. Operators can program their own prize values, and choose how often they want them to “win,” helping them keep control of the prizes.

Music and jingles create attention from passers-by. As well as the fisherman character, a set of hanging scales is available for use around the outside of the game. Amusement Corp supplies its own fish plush toys and popular fish hats, although a mix of prizes is recommended.

The company has first hand operational experience, enabling it to offer advice to other operators, and also ridding the system of all bugs. During the Perth Royal Show in Australia, Catch A Fish “beat all other games.”