The biggest news in Canadian waterparks this summer? Calypso Theme Waterpark. The crowds just kept coming and already the park’s developers are planning an expansion thanks to attendance 25% beyond their end-of-season expectations.

Owned by Groupe Village Vacances Valcartier, Calypso Theme Waterpark turned on its taps on June 7, hosting approximately 100,000 visitors during the first month alone. The park stands out vibrantly on a 100-acre site near Ottawa in Limoges, Ontario, and has a daily capacity for up to 12,000 guests. Built at a cost of $45 million (US$43.8m/€33.5m), Canada’s newest and largest themed waterpark features more than 35 slides as well as the country’s largest wave pool at 52,000 square feet.

“It was a challenge to launch a project of this magnitude,” admits Guy Drouin, president and CEO of Groupe Village Vacances Valcartier (GVVV). “Our main objective was to launch the perfect waterpark from scratch.

Drouin’s strength is his creative side, and has been closely involved with the creation and construction of every attraction at both his waterparks, the other located in the Québec City region, a four-and-a-half hour drive from Calypso.

Calypso is different from other Canadian waterparks for several reasons. First, it is large. As well as the 100 acres already used, there is another 350 acres for future development. The second factor is its composition. Since the park was built from the ground up, it has been separated into a commercial zone called Main Street as well as the main aquatic zone with all rides and attractions. In addition to that massive wave pool (three times the size of an NHL hockey rink), the park also boasts several state-of-the-art waterslides and a very active adventure river where the water velocity is two metres per second. On the service side there are numerous picnic areas, green spaces, restaurants and the Hawaiian Beach Bar.

“The park is not only just about waterslides,” highlights Drouin. “Theming was a strategic way to bring the guest experience to a new level in a fantasy world. Our guests are surrounded by pirates, a mad scientist, the Calypso Goddess and so forth. The five characters were the creation of our consultants and in-house marketing department. The characters are on-site everyday and are a very important part of the overall guest experience. They also appear in TV, radio and print ads.”

Located close to the premises of ProSlide, Calypso features plenty of signature attractions from, er …WhiteWater West. Despite their manufacture in the country, many of these are firsts for a Canadian waterpark. Among these is the Family Boomerango, which takes raft-borne riders on a vertical voyage up a wall, before they pause before falling back over a transition hump and into a splashdown pool below. The ride is ideal for groups and families to share together, as is Canyon Rafting.

There’s lots of fun for young guests too, including two mini slides, an enclosed body slide and a ramp slide. All of these attractions surround Pirates AquaPlay, the largest WhiteWater RainFortress in Canada. This multi-level play structure is watched over by Captain LaPlank and his giant tipping bucket. The structure boasts almost 200 features including numerous slides, bridges, climb nets, arch jets, water guns and pull ropes that provide hours of entertainment for hundreds of guests.

“Overall,” notes Drouin, “the attraction that stands out as the park’s icon is Calypso Palace, our giant wave pool. Paying homage to the Calypso name – derived from the sea nymph of Greek mythology – the structures around the pool are a mix of fantasy and acropolis-like grandeur.”

All of the park’s pools are heated: “In Canada,” offers Drouin, “especially in June and August, nights can be below the normal temperature. With water at 27°C (80°F), the experience is far more enjoyable.”

Guests at Calypso Theme Waterpark can enjoy a wide array of entertainment. There are two international-standard beach volleyball courts and grassy landscaped areas for relaxation, such as the area around the wave pool, with room for nearly 4,000 sunbathers. At the Hawaiian Beach Bar, refreshments and a live tropical band await. Several restaurants are also featured.

Of potential interest to other waterpark operators is Calypso’s use of a cashless biometric payment system, supplied by Softicket.

“The fingerprint technology being used for our cashless operations – much like RFID – is a new and popular concept,” says Drouin. “This innovation sets us apart and allows us to remain a leader among Canadian waterparks. Consumer reaction is excellent. Our system is safe, simple and allows the park’s clients to avoid returning to their locker for cash.”

The park’s pumping and filtration systems were developed by the Aquatic Development Group. Drouin, who boasts over 40 years experience in recreational tourist attractions, headed the park’s experienced development team alongside Pierre Thivierge, who has worked in the area for close to 15 years; Simon and Jérôme Drouin, Guy’s sons; architect Therese Bouchard; Ginette Robert, who has 10 years experience in tourist marketing; and Sylvain Lauzon, who has worked in the waterpark and resort industry for over 20 years. Obviously, the team behind the project was very experienced.

“At every step of the construction,” recalls Drouin, “we ran into all kinds of obstacles. We worked with several professionals such as engineers, architects and contractors to resolve any obstacles and be able to build and open this 100-acre park to the public.” 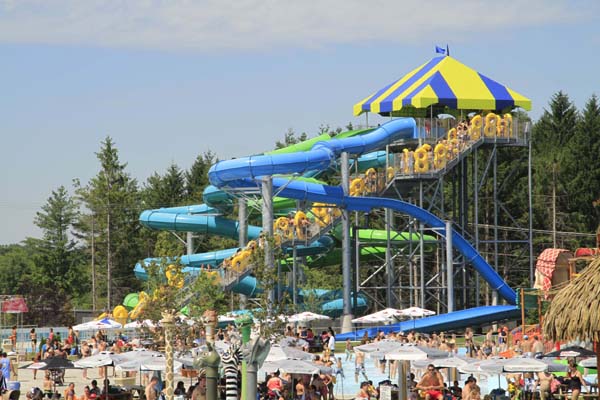 Calypso’s marketing strategy for the first year was to increase recognition. The target market includes eastern Ontario and western Québec, and the main audience consists of families. Various PR initiatives were implemented prior to opening, such as a preview weekend in October 2009 during which people could visit the site and purchase season passes at a lower price. Calypso’s owners also worked with tourist groups, tour operators, travel agencies, hotels, corporate groups and youth groups.

The waterpark is projected to generate $750 million in spin-offs over a 10-year period for the entire National Capital and Eastern Ontario regions. During the peak season, Calypso employs more than 500 people, including 125 lifeguards. There are 10 staff full-time in the office.

“We will add new attractions to the park for summer 2011,” confirms Drouin. “We are also planning a very large modern campground on the site.”

All of the slides at Calypso Theme Waterpark were supplied by Canada’s own WhiteWater West. The list is as follows (park name followed by WhiteWater’s name): 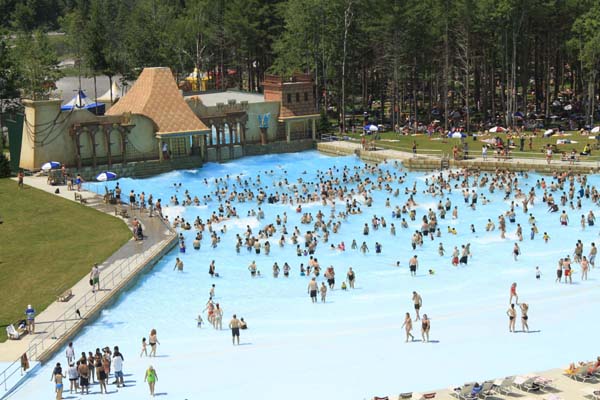