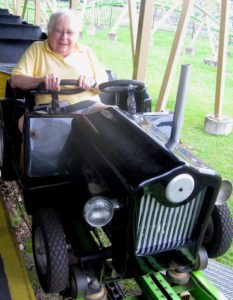 In the past I’ve written about how coasters have adopted an automobile theme to their trains. Coasters such as the Cop Car Chase operated from 1996 to 2006 at Germany’s Movie Park with trains themed as police vehicles. Zamperla’s Zig-Zag Wild Mouse coaster operates with auto-themed vehicles since 2013 as Twist ‘n Shout at Family Kingdom in Myrtle Beach. the Rock ‘n Roller Coaster limousine themed coaster launches at Disney’s Hollywood Studios, while the Italian Job coasters with cars themed as Mini Coopers at three Paramount parks including Kings Island, Kings Dominion, and Canada’s Wonderland. Carowinds and Kings Dominion boast versions of Intimidator, mega NASCAR themed coasters, and the race car themed Formula Rossa roars at Ferrari World Abu Dhabi. These all make sense. Coasters go fast, just as the automobiles they are themed for go fast.

Dixie Landin’ was built in 1999 alongside Blue Bayou, it’s sister waterpark, that opened 10 years earlier. Some of its rides came from the now defunct Fun Fair Park. It currently has 29 attractions, including an S&S combo drop tower, a log flume, four roller coasters, a variety of flat rides, 10 games, and much more. One of their coasters, Gilbeaux’s Galaxi, is the smoothest and quietest Galaxi I’ve ever experienced. Built in 1971 by SDC, the ride sits on a perfectly level concrete slab. Each bent leg sits on a block of wood with a ¾ inch (19 mm) hard rubber cushion between the leg and the wood. Nice.

But what fascinated me was its collection of classic rides. Whalom Park in Lunenberg, Massachusetts, had a similar collection before it turned out the lights in 2000. Dixie Landin’ still operates a Chance Rides’ Old 99 train ride. I know of no others in service. It has a fleet of 1985 Lusse bumper cars. Only four other parks still feature the durable Lusse cars, including Knoebels, Dutch Wonderland, Oaks Park, and Nova Scotia’s Atlantic Playland. There’s a Theel Merry-Go-Round, Hrubetz Paratrooper, Herschell Red Baron, Eyerly Spider, S.A. Roller Works Zoom, and three Hampton kiddie rides. Most of these are over 50 years old, and they purr like new. These are the rides I grew up with, and seeing them again brought a smile to my face.