Fairytale Farm, the UK’s first farm park designed around the needs of children with varying disabilities – but open to all – was officially opened by Prime Minister and local member of parliament David Cameron on 21 June.

During a tour of the site in Chippong Norton, Oxfordshire, Cameron met Olivia Laister, 15-year-old daughter of park owners Nick and Nicola Laister, who suffers from cerebral palsy and was the inspiration for the project. Built at a cost of £1 million, the park was funded almost entirely by the Laister family with the help of a group of volunteers.

The prime minister described the project as “inspirational”, recalling special memories of how his late son Ivan, who had both cerebral palsy and epilepsy, loved to stroke the fleeces of young lambs.

Fairytale Farm is described as a sensory and learning wonderland for all the family, and no pre-booking is required for guests to enjoy the attractions, regardless of their ability. Features include an adventure playground with a wheelchair swing, an enchanted walk, plus of course lots of farm animals.

Below: David Cameron cuts the ribbon as Nick and Grace Laister look on. 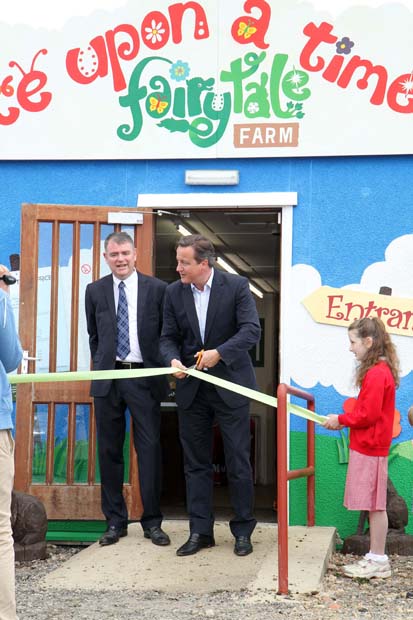