Last September, the regional Haut-Rhin council pulled the plug on French theme park Bioscope after several years of poor performance. Park World speaks to the man that plans to bring it back to life for summer 2014.

Opened near Alsace in 2006 as a place where families could learn about health, life and the environment, Parc du Bioscope featured a circular layout inspired by the crater caused by the Ensisheim meteorite, which struck northeastern France in 1492. After a tendering process this summer, the Paris-based Aerogroupe was announced as the new operator of Parc du Bioscope. The parent company of tethered balloon manufacturer Aerophile, it takes over the reigns from Compagnie des Alpes, which is now concentrating on its larger park operations including Futuroscope and the Walibi group. Here Aerophile president Jérôme Giacomoni (pictured) tells us why he believes the former Bioscope can fly high in future as Le Parc du Petit Prince.

What could guests find previously at Parc du Bioscope?

The first idea of the park was based around the meteorite, which still exists in a local museum, and then the theme was about humans” relationship with nature. There were no rides, but there were two big shows, some movies and some small things for kids. Close by there is also a small, nine room hotel and a pretty place called L’Ècomuseé, a museum village of 15th to 19th Century houses from old Alsace, where you can learn how our ancestors used to live. The design of the park is very nice, but it is difficult to make something new because you have very little space!

What is your “big idea” for Bioscope?

We have an exciting idea which we reveal probably around November, once I am sure we have everything in place. What I can tell you is that it is more than just a balloon, but it will absolutely fit in with what we already do – to make people fly.

Why do you believe you can make a success of the park where others have failed?

What we want to do at Bioscope is very specific. We will not put in any rollercoasters or other big things, because we would be sure to fail. However, the parking, the toilets, the restaurants; everything is already there, and this is a unique opportunity for us to test a new concept in an “empty shell.” Although we operate balloons on eight sites across the world, this will be the first time we have had a whole park.

What is your target market/attendance?

We have made a very, very reasonable business plan. We don’t want to be too ambitious, and we will do everything very low profile. We will target families with kids two to 14 years-old; teenagers are not really our market. Previously Bioscope did 80,000 visitors, so if we can better that I would be happy.

Who is your competition?

Well we have the master of masters and some of the best parks in Europe within driving distance – Disneyland Paris, Parc Astérix, Europa-Park – but I do not think they are really competition because our concept is completely different. We are not an attraction park, we are a theme park. This is a distinction that is common in France if you look at other parks like Futuroscope and Puy du Fou, neither of which are attraction parks. In Alsace there is no competition from other French theme parks, so I hope tthe local people come and spend some time with us.

What state do you believe the French parks and attractions industry is in right now?

I think it is very strong position. France as a country is the number one destination worldwide for tourists. Big parks like Disneyland, Puy du Fou and Astérix are growing, there are also a lot of smaller attraction parks that are also extremely good like Nigloland and Le Pal, plus you have new groups like Looping coming along. I think now it is very normal for French people to go to the parks. Maybe some years ago that wasn’t the case.

Why is the Alsace region the right location for your park?

You know, Alsace is the number four French destination, after Paris, the French Riveria and the Alps. It’s very famous in Europe for beautiful food, wine and landscapes, and the weather is very good at staying dry because the Vosges mountains stop the rain. There is a lot of potential. The balloon makes a lot of sense, and the views will be just amazing. You have on your right the Vosges mountains and Black Forest in Germany, in the middle you have the Rhine river, in the north you have Alsace centre, and behind you have the Alps. So you are like in a U-shape of mountains, and the balloon will be the only way to see it all – like Google Maps! There was no observation platform in the park before.

You plan to reopen the park in time for Easter?

I hope so. It’s an amazing challenge and I know even people who are used to operating parks might be surprised by that, and they would be right, but let’s try! However we are very used to these challenges. Last year we opened balloons at Pigeon Forge in Tennessee and San Diego Zoo in California, we opened the Aérobar in Futuroscope, and we relaunched the balloon in Paris with a new design. So we opened four new operations in two countries on different continents; here everything will be in one place so it is not an impossibility. The season will run from Easter to Halloween. Christmas in Alsace is also very strong, because you have the Christmas market, so we will probably open up for a few weeks in winter when you will see snow on the mountains, it could be extremely nice.

Just one more thing – how will you cope with the new rate of tax imposed on French parks and attractions?

You know, the French love tax! Before our industry was subsidised because we create a lot of jobs and investment in places where there are no more factories or anything, but the taxes were so low the government decided even we should pay more tax. The TVA [Taxe sur la Valeur Ajoutée] has gone up from 5.5% to 7% and now maybe 10% in 2014. It’s bad news, but that’s life and we have no choice, you have to go on. It will be quite difficult for some operators, but we hav included the new rate of tax in our business plan, and maybe it will be a little easier for us than those who were already paying the lower rate.

Balloons and bars in the sky

Aerophile has supplied more than 60 tethered balloons to 30 countries, as well operating its own sites in Paris, Disneyland Paris and Futuroscope in France, Bologna in Italy, and in the USA at Pigeon Forge, Tennessee; Walt Disney World, Orlando; Orange County Great Park and San Diego, California.

This season the company unveiled its newest attraction concept when it launched L’Aérobar at Futuroscope. Guests order their drinks and nibbles then climb aboard the 12-passenger gondola and fasten their seatbelt ready to be elevated 35m (115ft) above the park.

“The concept has worked amazing well at Futuroscope,” says Aerophile boss Giacomoni. “I was pleasantly surprised by the results, nearly a 90% occupancy all summer. It’s got great potential.” 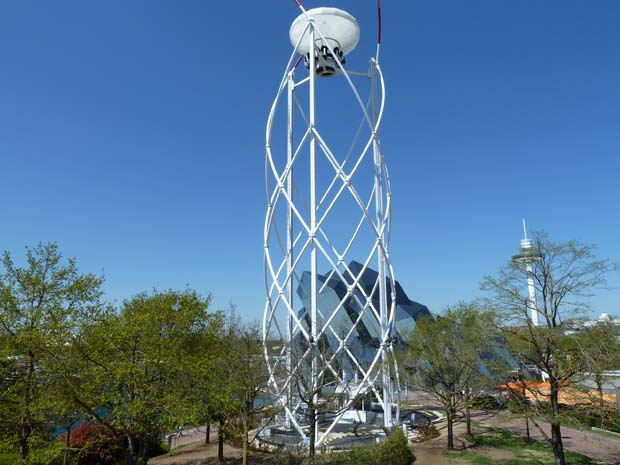