For Richard Cadell, co-owner of Fun City at Brean Leisure Park in south west England, creating a branded attraction was easy –and he didn’t even need to buy a licence. Here he offers advice to other operators looking to integrate intellectual property (IP).

As well as running the park together with his brother David, Richard also enjoys a career as a television presenter and entertainer. Three years ago, he bought the rights to Sooty, the longest-running children’s TV show in the UK, which he has hosted since 1999, taking over from Matthew Corbett, son of founder Harry Corbett. Visitors to Fun City can already enjoy a Sooty live show at the park at various times throughout the year, as well as daily meet and greet sessions with the yellow puppet bear and his friend Sweep. Coming soon they will also be able to visit a Sooty exhibition, and more attractions are planned.

“We never bought Sooty purely with a view to this park, but we’d be stupid not to do something on the back of the television show,” says Richard. “We got all the old sets here – Sooty’s bedroom, Sooty’s kitchen, Sooty’s gymnasium – as well as the old Harry Corbett scripts, so I am going to do a big exhibition. I’ve got to store it all anyway, so I might as well let people come and see them.”

This September a new series of The Sooty Show screens on ITV, filmed at Fun City. Though the autumn/autumn scheduling isn’t perfect, it will provide great exposure for the park on one of the UK’s main television networks, and hopefully encourage new visitors next spring. If it’s a hit, then Richard hopes to introduce some Sooty-themed rides.

“That’s the plan, but I don’t think I’d go to the expense of having a Zamperla bespoke ride or whatever. I think we will get some older stuff, strip it down, repaint it and refurbish it. It all depends how successful the TV show is.”

One thing Fun City’s owner hasn’t had to do is pay big bucks to an external licence owner. While the Sooty attractions might not be on the same scale as other branded areas such as Peppa Pig World at Paultons Park or Thomas Land at Drayton Manor, Richard can experiment with far less risk.

“Without question Paultons will be paying a royalty on the additional income since Peppa Pig. In five years time they might want a lot more money and you are stuck with all these themed rides you can’t use unless you pay. Or, as I’ve found because I’ve licensed Basil Brush, you get a change of clientele and some whizzkid comes in and makes sweeping decisions about the brand; suddenly they decide Peppa should be blue instead of pink, and you’ve got to change everything. You’ve got to protect you brand, of course, but they’ve got you all the time.”

“I would say that it’s almost worth parks considering either developing their own characters,” concludes Richard, “or looking at some of the licences that are out there and seeing if they are for sale. I know a couple that are.”

Pictured below: Richard Cadell with Sooty and friends at Fun City 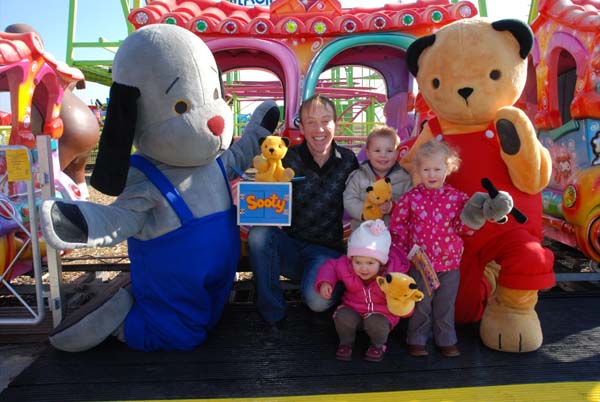