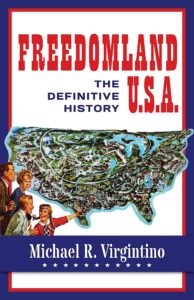 Before regional theme parks proliferated across the American landscape there was Freedomland U.S.A. A new book, Freedomland U.S.A.: The Definitive History, documents the entire story from conception to bankruptcy of one of the most innovative and beloved theme parks in America. A must-read for anyone interested in the history of the modern theme park, this book includes first-time interviews with park employees and never before published photographs.

Located in The Bronx, New York, Freedomland U.S.A. was celebrated as the “Disneyland of the East.” While it survived only five seasons (1960-1964), to this day the park generates fond memories among baby boomers who enjoyed its American history-themed attractions. It was conceived and built by C.V. Wood and his Marco Engineering Company. He was Disneyland’s first employee and he brought Walt Disney’s imagination to life by leading the team that built that park. He then created Marco Engineering to build theme parks and other venues across the country, including Six Flags Over Texas in Arlington. The northeast Bronx marshland that featured Freedomland U.S.A. eventually became a housing development and a shopping center.

Freedomland U.S.A.: The Definitive History features stories about the building of the park and background about the various attractions from the recreation of the Chicago Fire to a trip on a bull boat in America’s untamed wilderness on the Northwest Fur Trapper attraction. Dark rides included the Earthquake of San Francisco, a Buccaneer attraction and the Tornado recreation in the New Orleans section of the park, and a Mine Caverns ride deep into the earth in the Old Southwest. The dark rides and several other attractions were created by Arrow Development, which designed attractions for Disneyland and many other parks. Another popular Freedomland attraction allowed guests to witness the early stages of audio-animatronics as they rode on a correspondents’ wagon through the battle lines of rival Civil War armies. Guests also enjoyed Wild West shoot-outs at Fort Cavalry and staged robberies on vintage steam trains. Young children especially enjoyed a ride aboard Danny the Dragon, a fire-breathing mythical monster.

Through a well-researched narrative, personal and newspaper accounts, interviews, and exclusive photos, journalist and author Michael R. Virgintino presents the definitive history of Freedomland, from the people behind its creation, and the executives, entertainers, and sponsors who kept it running, to in-depth looks at each of its historically themed lands, and an analysis of the park’s inevitable bankruptcy.

Freedomland U.S.A.: The Definitive History by Michael R. Virgintino and edited by Bob McLain, consists of 322 pages with 27 vintage photographs. Published by Theme Park Press, it is priced at $24.95 in paperback. Freedomland U.S.A. is available in local bookstores, independent retailers, and on-line retailers.