Book Review – Creating My Own Nemesis by John Wardley

Touring the country as a “famous Russian” variety hall act called Vadir and Dorinova, it was John Wardley’s great aunt and uncle that were responsible for sparking his interest in the entertainment industry.

They were neither ‘famous’ nor ‘Russian’,” recalls John in this recently-released autobiography, Creating My Own Nemesis.

The man who went on to design famous rollercoasters including Nemesis and, as he puts it, “introduce the theme park to Great Britain,” spent many years in theatre and television before entering the attractions business. Yet he always wanted to be the one operating the spotlight rather than standing in its glare.

As an assistant stage manager at the Hippodrome in the seaside resort of Great Yarmouth he proved rather creative, not always with the desired results. An experiment with a home-made dry ice machine for a pantomime production caused both the performers on stage and in the orchestra pit to be submerged in dense fog. “How the f•©k are we expected to play the music when we can’t see the f•©king instruments,” exclaimed the trombonist.

The book recounts many more amusing tales from these days, when John supplemented his modest wage by supplying custard pie mix, gorilla suits and rubber skeletons to the trade. The latter eventually bought him into contact with John Collins at Barry Island Pleasure Park in South Wales, who was looking for props for his Ghost Train. A young Wardley ended transforming the ride into Uncle Frankenstein’s Scream Machine. Even though he was now earning good money producing special effects for film and TV (adding several James Bond movies to his resume), John realised that he was missing something.

“In film production you are totally isolated from the very people you are striving to amuse, thrill, shock or amaze,” he observes. “In an amusement park you get instant, live reactions.”

John was hooked. More collaborations in Barry Island followed, and he developing a primitive animatronic for the park’s Whacky Goldmine. The Charlie Pluckett character in turn attracted the attention of the team at Madame Tussauds, whose portfolio of other attractions at the time included Chessington Zoo near London, which despite is location was struggling.

“I was convinced that the commercially-viable way to turn Chessington into Britain’s first theme park was to conceal beneath the veneer of a fantasy environment some conventional amusement park hardware. The rides would be used as nothing more than a way to get the audience through the show. The ride hardware would not be the show. And this is the fundamental difference between a theme park and an amusement park.”

Now known as Chessington World of Adventures, the former zoo’s new found success inspired the Tussuads group to expand it its interest in the park business, and John persuaded it to buy Alton Towers. It was here, after working earlier working on the Vampire at Chessington, that he really became engrossed in rollercoasters, but not before he and friend/colleague Keith Sparkes created the elaborate Haunted House dark ride.

After riding a “slow, cumbersome and boring” prototype of a suspended coaster at the works of Arrow Dynamics in the States, John got wind of a ride being developed in secret by a “rather enigmatic Swiss company.” That company turned out to be Bolliger & Mabillard (B&M) and its inverted coaster became a phenomenal success for Alton Towers in the shape of Nemesis. The name for the ride, John reveals, came at the end of a long night sharing ideas over a bottle of Southern Comfort with the park’s then marketing manager Nick Varney (whatever happened to him?)

John went onto develop several more notable rides with B&M, including Oblivion and Air at Alton Towers and Dragon Khan for PortAventura in Spain, all of which are covered here. And while he admits that some of his more recent collaborations with Merlin Entertainments (which acquired the Tussauds attractions in 2007) have been more in a figurehead capacity, he retains a consultancy position with the company.

Like all good rollercoasters, this book is too short, and diehard theme park fans may wish there was more detail on some of the rides and park projects that Wardley was involved in. Yet anyone who enjoys a good tale brought to life with the aid of some colourful characters will enjoy this insight into an industry that is as entertaining behind the scenes as it is on stage. It also provides reassurance that a fulfilling career comes from following one’s passion.

Self-published via Amazon, Creating My Own Nemesis clocks in at 156 pages and can be ordered in both print and e-book format here.

Below: John Wardley with Nemesis At Alton Towers 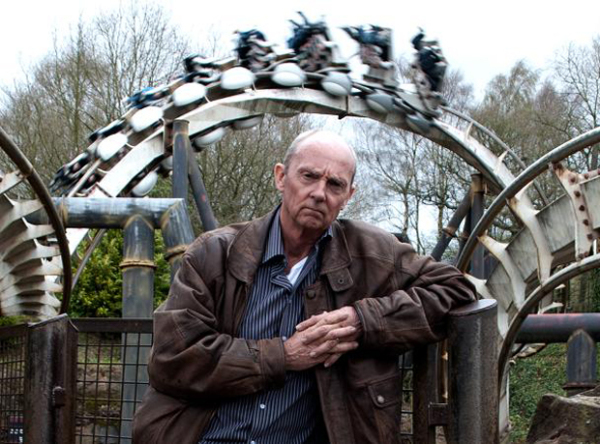