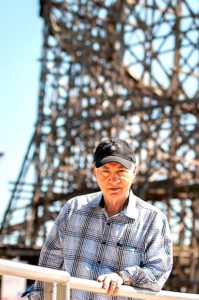 Always Cedar Point, a Memoir of the Midway gives the reader a rare insider’s view of the operations of one of the world’s greatest amusement parks, Cedar Point. When author H. John Hildebrandt began work in February 1974, there was no “Cedar Fair,” just a single amusement park, Cedar Point. The best thrill ride was a steel coaster called the Jungle Jet. Eventually, a second amusement park was acquired, and the company grew until it owned 11 parks. Cedar Point added a water park, additional hotels and campgrounds. Hildebrandt was there for almost all of it, beginning as a ride operator and eventually becoming the park’s general manager, until he retired 35 years later in 2013. Hildebrandt brings the reader inside the fascinating world of what it takes to market and operate a destination built for fun. It’s a must-read.

Always Cedar Point is filled with many inside stories and apparently a closely-guarded secret or two. Hildebrandt walked the midway every day for 40 seasons, talking to guests and employee. He collected a lifetime of stories. There is humour, history, disappointment, thrills, and excitement in his storytelling. And there are memorable people as well. The focus of the book is Hildebrandt’s relationship with the park’s most iconic attractions such as its legendary collection of world class roller coasters, including Millennium Force, Top Thrill Dragster, Magnum, Maverick, Corkscrew, and GateKeeper. As marketing vice president, it was Hildebrandt’s job to introduce these magnificent scream machines to the world. From how the coasters were named to thrilling first rides to the creation of memorable advertising campaigns, Hildebrandt gives the reader a unique perspective, including lessons learned.

Always Cedar Point, a Memoir of the Midway by H. John Hildebrandt, edited by Tim O’Brien, consists of 444 pages with many black and white photographs. Priced at $22.95 in paperback, Always Cedar Point is available in local bookstores, independent retailers, on-line retailers, or through publisher Casa Flamingo Literary Arts at www.casaflamingo.com.