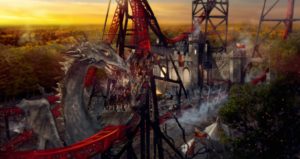 In November last year, the amusement park in Lichtaart announced that it will open a new spectacular roller coaster in 2019. This is a triple launch coaster, which means it is launched three times during departure. It will be more than 40 metres high and reach speeds of more than 100 km/h. The new attraction will extend the park and also be the centrepiece of a new thematic zone called ‘Land of Legends’.

Cowboy Town  celebrated its fortieth anniversary last year. The zone, featuring attractions such as Forbidden Caves, Mount Mara and Naga Bay, was named Adventure Valley in 2015. “However, the Land of Legends will be the first thematic area within Bobbejaanland that offers visitors a complete experience,” says Yves Peeters, general manager of the park, with some pride. “It’s the biggest investment ever made in the park’s history, so I’m convinced that we’re doing something legendary here. After all, we’re going much further than simply building a new roller coaster. Bobbejaanland icons, such as Typhoon and Sledge Hammer, will also play a role in the 2-hectare zone.”

The Guardian of Elements created  the Land of Legends in a far-off corner of our planet. The sole purpose was to preserve the four elements of nature in their purest form. To protect against evil forces, he closed off the four realms with gates. What he did not know, however, is that evil had been lying in wait for a long time and the realms were being threatened from within. Each attraction in the zone represents a different element.

The Land of Legends will open to the public in June and anybody visiting Bobbejaanland will then personally become part of the story. The Guardian will only succeed in driving away the evil forces with the help of visitors. “In the new roller coaster, for example, you will enter into a fiery battle with the dragon Fogo. That is why the attraction is getting the suitable name Fury,” explains Peggy Verelst. “The story was written by Mathilda Masters, author of various popular children’s books.”