A foreword by Pleasure Beach director and former IAAPA chairman John Collins notes that the venue founded in 1896 by William Bean has always enjoyed an American influence, and even attracted the attention of Walt Disney during his fact-finding trips to Europe in the 1950s.

The Pleasure Beach is, “One of the great success stories of British entertainment history,” notes Professor Toulmin, the book’s author and founder of the National Fairground Archive. Originally based on the sands, the park was buoyed, like its US cousins, by the arrival of new transport terminals. Earlier travelling rides were eventually replaced by permanent constructions such as Sir Hiram Maxim’s Flying Machine, now the oldest continuous working amusement park ride in Europe. It and other attractions like the River Caves and Water Chute were sourced from the Earls Court Exhibition in London, while the park’s first rollercoaster arrived in 1907 in the shape of the Scenic Railway, followed in 1909 by the Velvet Coaster.

Income was consistent as families chose to holiday at home in the post and inter-war years. Then followed the addition of legendary attractions such as William Homer Strickler’s Big Dipper and Noah’s Ark, alas no longer in service. The Big Dipper, however, is still going strong, as are most of the wooden coasters added in subsequent years including the 1933 Zipper Dipper, 1934 Roller Coaster and 1935 Grand National.

Leonard Thompson, William Bean’s son-in-law who took over the park in 1929, added not just rides but also impressive structures such as the art deco Grand National station, Fun House and a new Casino building. As Toulmin notes, “the link between design and architectural landscaping has always been a feature of the Pleasure Beach” – something which has been given renewed attention in recent years by Amanda Thompson.

While the 1950s were a struggle – 1957 is cited as the worst season since 1930 – the arrival of the Log Flume in 1967 represented a major investment and the start of a long relationship with Arrow Dynamics. Yet Blackpool was facing another decline by the time Geoffrey Thompson took to the helm in 1977, and soon there would be fresh competition from new “theme” parks such as Alton Towers.

The smiling face of “Mr Funshine”, a character adapted from an old ice show poster, would come to symbolise the coaster-fuelled heydays of the ‘80s and early ‘90s as Geoffrey introduced a raft of new white-knuckle rides. Starting with the Steeplechase in 1977, further steel constructions followed including the Revolution (1979), Avalanche (1988) and Geoffrey’s crowning glory, the Big One in 1994. The addition of Valhalla in 2000 continued the park’s dark ride tradition, in larger and more modern fashion.

The Big Blue Hotel, opened in 2033, ushered in a new era of hospitality and style. Yet only a year later Geoffrey and his mother Doris, aged 101, died within days of one an other. Amid these sad and abrupt circumstances, Amanda Thompson took over as managing director, building on her expertise with the park’s in-house live entertainment arm Stageworks Worldwide Productions. A section of the book dedicated to these spectacular performances, including Hot Ice, Mystique and Eclipse, celebrates their fabulous costumes and choreography.

In an era when several large parks across Europe have fallen into corporate hands, Blackpool Pleasure Beach (or Pleasure Beach Blackpool as we must now call it), remains a proudly independent family business. Amanda’s brother Nick Thompson now serves as deputy managing director, while their sister Fiona and mother Barbara still take an active interest in the park. The opening of Nickelodeon Land this spring signals a fresh wave of investment, just as several other developments are happening across Blackpool.

For those wanting to discover why the Pleasure Beach is more than just an amusement park, or simply relive some old memories, this carefully prepared publication comes recommended. The relatively concise but informative text is broken up by short histories of individual attractions and park collaborators, plus many nicely presented pictures from the Thompson family archives. Limited to just 1,000 copies, it is available from the Pleasure Beach online shop. 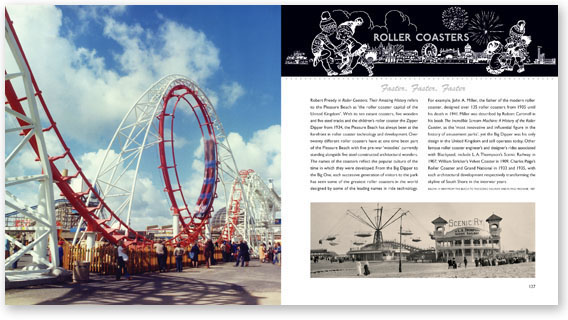