In 1960 plans were announced for Bible Storyland, a $15-million theme park in Cucamonga, California, which its creators hoped would rival Disneyland. Judged to be blasphemous by local clergy, the project was abandoned.

Bible Storyland may be gone, but it’s not forgotten. The park is the focus of a new documentary film, and it’s a hoot. It tracks art dealer Harvey Jordan, who acquired over 50 original concept drawings for the park prepared by Bruce Bushman, a former Disney artist. Complete with dream sequences, animation and even a curse, the film plumbs the depths of Bible Storyland and its affects on the compulsive Jordan, his marriage and his family.

The 60-acre theme park would have featured Bible-themed rides and attractions. The project was conceived by showman Nat Winecoff who had previously helped sell Disney’s park to investors. Backers of Bible Storyland included yo-yo promoter Donald Duncan and actor Jack Haley, who played the Tin Man in The Wizard of Oz.

As envisioned, the park would have been heart-shaped, “symbolic of God’s love for humanity.” Divided into six areas, including Babylon and the Garden of Eden, each would have had rides, bazaars, restaurants and dioramas. Awaiting park-goers would have been such enticing experiences as chariot racing in Rome, a ferry ride across the River Styx or a “Ride To Heaven.” There were even plans to sell “lion burgers,” reversing the biblical tale that features Christians being fed to lions.

Bible Land The Movie is available now on DVD from biblestorylandmovie.com. 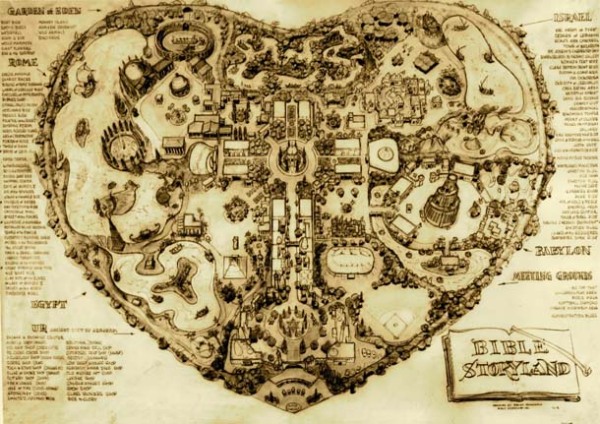