Betson named Distributor of the Year at Amusement Expo

At this year’s Amusement Expo, held at the Las Vegas Convention Center, Betson Enterprises were named AAMA’s 2017 Distributor of the Year as voted on by the AAMA supplier membership.  The award was accepted by president and CFO Bob Geshine, director of financial services Catherine Algra, and vice president of sales and marketing Jonathan Betti. 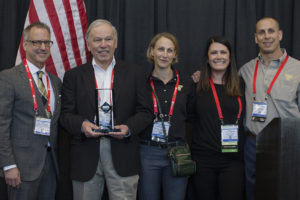 “All of us at Betson Enterprises are honored to receive the Distributor of the Year award given by AAMA,” said Geshine. “We would like to thank all of our partner suppliers, loyal customers as well as our dedicated team here at Betson for making 2017 a great year for Betson.”

Betson’s Goldfinger products were showcased at the Expo, too, with the booth being awarded an Outstanding Achievement in Exhibit Booth Design award. Betson also displayed their Raw Thrill product line-up, featuring releases such as Injustice, Snow Boarded, and Teenage Mutant Ninja Turtles.

The 2018 Amusement Expo was held across February 28th to March 1st.

The Flyer set to launch over San Francisco this summer