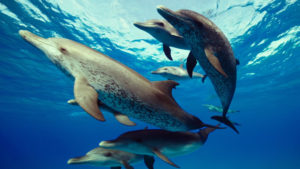 SimEx-Iwerks Entertainment, a world leader in 4D Theater experiences, has partnered with Talbot Films to create the cinematic attraction experience Being Dolphin 4D. The film takes a look at one of the ocean’s most complex and charismatic animals, featuring a first-of-its-kind approach from the perspective of the dolphin – encouraging guests to dream, dive, and discover throughout the aquatic journey.

The 4D experience explores how dolphins engage with each other to survive, thrive and play in the ocean – from the California coast to the Caribbean Sea.

The National Aquarium hosted the world premiere of Being Dolphin 4D during a member preview event on April 25 that included an exclusive Q&A with award-winning director/cinematographer Bob Talbot, and launched to the public on April 27.

Talbot, an advocate for marine conservation wrote, directed and co-produced Being Dolphin 4D, which was designed and created specifically as a 4D Experience. 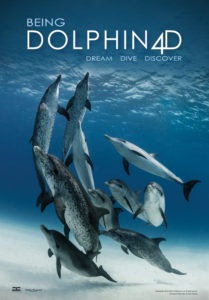 “This truly was a passion project for all involved,” says Talbot. “I am grateful to have such incredible partners that made it possible, from the shooting of wildlife scenes in challenging open ocean conditions to the extremely complicated post-production process, everyone brought their all.”

Talbot enlisted the help of SPINVFX, who created computer generated scenes to allow guests to experience how dolphins are able to “see” with sound. They worked closely with visual effects designer Boyd Shermis to showcase echolocation from the dolphin’s perspective, and composer Cliff Eidelman created a musical score that complements the on-screen ethereal beauty.

Award-winning Vision Research provided the Flex4K camera that captured the extreme slow-motion sequences from unique perspectives – including custom underwater propulsion vehicles that allowed the camera to “fly” with dolphins. The team at Prime Focus converted the original footage into the highest quality 3D while EFILM’s team of expert Colorists and Editors provided the finishing work.

Sold out FMX 2018 highlights the power of creation