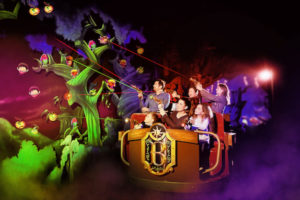 Alterface is proud that two outstanding dark rides it empowered with interactive technology, received the prestigious annual Thea Award for Outstanding Achievement. During IAAPA Attractions Expo in Orlando, USA, the announcement was made by the TEA Committee that Bazyliszek in the Polish Legendia park was awarded for Outstanding Achievement (AOA) in the category limited budget. Justice League: Battle for Metropolis was awarded for AOA in the category attraction.

Like the TEA – Themed Entertainment Association itself, the Thea Awards were created to bring recognition to achievement, talent and personal excellence within the themed entertainment industry. The Thea Awards are now internationally recognized as the equivalent of an Academy Award in the themed entertainment industry. Each year over a hundred highly qualified achievements from all over the world compete for a dozen awards. The awards will be officialised during the formal Thea Awards Gala held on April 13, 2019 at the Disneyland Hotel in Anaheim, California, USA.

The Bazyliszek ride in Legendia, Poland, had already proven its value in Europe with four other awards during EAS in Amsterdam: a Parkscout Awards for Europe’s Best New Rides 2018, a European Star Awards for Best New Ride 2018. And Park World Excellence Awards assigned the first prize in the category Family Ride of the Year and Best Use of Technology for the trackless vehicles.

Benoit Cornet, CEO & Founder of Alterface, concludes: “This has been a very special IAAPA show for us, with great recognition and visibility across the entire event. As a pioneer in interactive dark rides and theatres, we are very pleased to see interactivity and mixed-media getting more attention and recognition in attractions. These can bring the park to a next level of digital entertainment, building on their strengths in physical family experiences and ensuring a strong edge for the future. Alterface will be pleased to advice and support them in these efforts.”