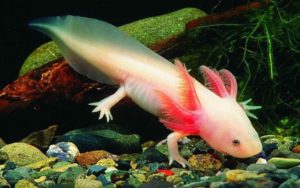 They are one of the world’s weirdest, cutest and most critically-endangered creatures, and now visitors to Sea Life Orlando Aquarium can journey deep into the lakes of Mexico to meet ‘The Last Dragons’ before they disappear. Axolotls, (pronounced ACK-suh-LAH-tuhl), also known as a Mexican salamander or a Mexican walking fish, are among the most widely studied animals on the planet thanks to their fascinating ability to regenerate their own bodies and avoid the aging process. Believed to have existed over 140 million years ago, they live exclusively in the lake complex of Xochimilco near Mexico City but for a limited time are taking up residence at Sea Life Orlando Aquarium.

Now open, ‘The Last Dragons: Discover the Superpowers of the Axolotls’ is an all-new walk-through experience featuring kid-friendly interactives, immersive design and more to take families on a fun and educational journey into the world of one of Earth’s most fascinating creatures.

“We’re excited to immerse guests into the wonderful underwater world of axolotls and witness the super powers that make these creatures so fascinating, rare and loved by popular culture,” said James Paulding, General Manager at Sea Life Orlando. “Though less than one-foot long, Axolotls are kind of a big deal having starred in countless internet memes and inspired Pokémon characters Wooper and Quagsire so we know visitors of all ages are going to have a ton of fun exploring their real world!”

Visitors will come face-to-face with the rare creatures and learn firsthand all about the Axolotl and other inhabitants that live under the waters’ surface. Exploring sub-tropical surroundings, the experience guides guests through the shadows of a once great Aztec village, with immersive visual, audio and hands-on interactive play designed to encourage curiosity, discovery and action.