The luxury resort operator Kerzner International has been forced to surrender ownership of its Atlantis resort in the Bahamas (pictured) and may have to do the same in Dubai, writes the Wall Street Journal (WSJ).

Struggling to refinance the debt of a 2006 buyout, the company announced that it would it forfeit the flagship Atlantis Paradise Island, its ocean-themed hotel, waterpark and casino development in the Bahamas, to Brookfield Asset Management. Two smaller resorts were also involved in the deal.

The WSJ reports that Kerzner now wants to sell its 50% stake in the US$1.1 billion Atlantis The Palm, a showpiece part of Dubai’s Palm Jumeirah manmade island, to local partner Istithmar. The investment arm of Dubai World already owns 31% of Kerzner International.

If the sale of Atlantis The Palm goes ahead, Kerzner will be left with stakes in six smaller One & Only branded resorts, plus contracts to manage Atlantis in the Bahamas and a number of other properties.

Kernzer chairman and CEO Sol Kerzner made his name with the once controversial Sun City casino resort in South Africa. Opened in 1998, Atlantis Paradise Island is described as one of the busiest casino resorts outside Las Vegas, but has been suffering from falling hotel occupancy in recent years.

Atlantis The Palm, which due to local restrictions does not feature any gambling, debuted in 2008 with an ostentatious multi-million dollar opening ceremony featuring the singer Kylie Minogue. The resort’s Aquaventure waterpark now outperforms Dubai’s established Wild Wadi waterpark in terms of attendance.

Pictured below: Atlantis The Palm in Dubai 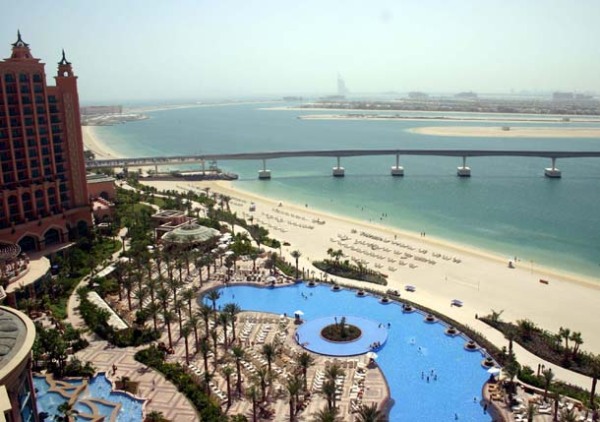