Whenever an historic amusement park is lost forever, the lament is loud. However, says Gary Kyriazi, we should celebrate the few survivors just as loudly, if not more so. One such survivor is unknown to most people. It sits quietly on a lake tucked in the northeastern corner of Iowa.

Off the beaten path of US Interstate highway travel, and far from any metropolis of significant size, Arnold’s Park seems an unlikely candidate for survivorship, and yet it has done so for 111 years. Five years after Coney Island presented its first rollercoaster, entrepreneur Wesley Arnold built a water toboggan slide which sent riders into Lake Okoboji, and Arnold’s Park was born.

Steam ships which were already carrying passengers through the Iowa Great Lakes now made regular stops at Arnold’s Park for bathing in the lake and nightly musical concerts. In typical amusement park history, a carousel and succession of rollercoasters were quickly added, and Arnold’s Park became a major destination. The Roof Garden was a popular venue for the big bands of the 1940s and for the hottest rock ‘n’ roll acts of the ‘50s and first half of the ‘60s.

The downhill slide of traditional American amusement parks in the late ‘60s and ‘70s as the theme parks took over wasn’t lost on Arnold’s Park, as it felt the pinch like everyone else. As rock ‘n’ roll acts turned into big money, promoters could no longer afford to bring the big names into such smaller venues as the Roof Garden, and a tornado finally destroyed it in 1968. But Arnold’s Park, due mostly to a major renovation in the early ‘70s by local philanthropist Chuck Long, continued with tenacity and, most importantly, community support.

Succeeding generations of families throughout the 20th Century had instilled strong, fond memories of riding the Arnold’s Park’s rides, swimming at the public beach, touring the lake in the Queen II excursion boat, or simply embracing the beautiful ambiance of the pier and plaza. So it shouldn’t be surprising when, in 1999, a developer purchased the site and announced his plans to raze the park and build a condominium, hotel and retail complex on the beloved site, a foundation of preservation was firmly in place. The resultant shockwaves throughout the Iowa Great Lakes community was a call to action. Losing Arnold’s Park was not only unacceptable, it was deemed impossible.

The first battle to save Arnold’s Park was won when the developer agreed to sell the property to the Iowa Great Lakes Maritime Museum, the non-profit group that managed the park. The second battle was his demand: $5.5 million, to be paid in six weeks. However seemingly impossible, the resultant Save The Park campaign raised $7.25 million, paid the developer, and Historic Arnold’s Park Inc became the new owner.

“It was a miracle! It truly was!” Sue Richter, who headed up the Save The Park Campaign, is amazed even today. “We did everything we could think of to raise the money, and the snowball effect was incredible. Everything aligned perfectly. Monies just poured in for the park, not only locally and statewide, but nationally and even internationally!”

“Arnold’s Park had by this time reached four generations,” Sue Richter explains. “Many people who had moved out of the area and spread over the country still kept summer homes here, or their children and grandchildren now living elsewhere in the country would go back to visit grandma and grandpa for the summer. So Arnold’s Park became a very strong part of their childhood, an indelible memory. It never left those who grew up here or visited here. We used to say there was a big magnet in the lake that would keep pulling people back, no matter where they had moved to. And so we received contributions from all 50 states and nine foreign countries.

“I don’t think the locals realised the scope and depth and the breadth of the feeling for Arnold’s Park,” Sue continues. “We got a lot of press, and they sent it out to the larger networks. There was a huge outcry, not only from lovers of the park, but from those who wanted to protect the ‘green space.’ Enough condo’s and retails outlets already, let’s just have some clean lakeside. Or if there had to be something on the lake, how about a traditional amusement park, a pier, and a music venue that everyone can enjoy? So it was an environmental issue as well as a recreational issue for us.”

Sue is quick to explain that the $7.25 million didn’t come all at once. “It was received in pledges over a period of time. This wasn’t the first time we’d done something like this. The fundraising philanthropy has been done many times over here, so we had very strong experience in how to raise the money. Because it didn’t come all at once, we didn’t have a huge influx of cash right away to make improvements on the park, but there was enough to pay off the owner and that was, of course, the immediate goal. We proceeded improving the park in gradual, solid steps.”

Today, Arnold’s Park is nothing short of a wonder, particularly given how close it had come to being another amusement park statistic. It is spotless and contains an arsenal of pristine, classic amusement rides such as the Rock-O-Plane, Roll-O-Plane, Scrambler, Eli Ferris Wheel and Tilt-A-Whirl, as well as a few nods to the more “modern” rides of the 1960s such as the Trabant and the Log Flume. Arcade games, Skee-Ball, a miniature train ride and several classic kiddie rides beautifully round out the park.

And of course the 1927 wooden rollercoaster, renamed The Legend when Arnold’s Park was reborn, is painted sparkling white with a red track, and performs flawlessly as it races along the lake. The original Tipsy House and Mirror Maze are still nestled within its lift structure. The Queen Belle II offers excursions over Lake Okoboji, the Rock and Roll Museum celebrates the icons of rock that appeared at the Roof Garden, and regular concerts of all types of music take place in Preservation Plaza.

While touring Arnold’s Park and speaking with General Manager Scott Pyle, I commented on how the park, with its feeling of newness and classic rides, is more than just stepping into the past, it’s bringing the past into the present. 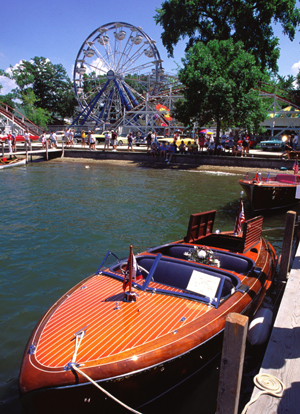 “Oh sure,” he replied. “I think the only classic ride we’re missing is a Paratrooper, and we almost got one last year, for only $30,000.”

Only $30,000? Was it the original, static model that took forever to load?

“No, it was the newer, hydraulic version. But we had to pass.”

You passed on it? How could you afford not to buy a hydraulic Paratrooper at that price?

“Well, we have to spend our money carefully, make our decisions wisely. Maintenance is our priority here. $30,000 can buy us a lot of parts for rides, fresh concrete and paint.”

Of course, he’s absolutely right. After leaving an amusement park, people will remember peeling paint and broken sidewalks before they notice that there wasn’t a Paratrooper.

Sue Richter agreed. “The park board is always trying to get something new and fresh, and yes, it would be nice to be able to say ‘New This Year At Arnold’s Park…’ but our main thrust is to maintain what we have and to preserve the historic component.”

Consequently, subsequent to the Save The Park campaign there was another large campaign in 2005 called Sustain Our Park, which raised $2 million.

“It was for debt reduction because at that time the park had incurred some debt. It costs so much money to open up the park — usually about $500,000 before we get receipts in — that we have to borrow to get things going each year. So our Preserve Our Park fund manages to keep contributions coming.”

Commemorative bricks can be purchased for $500 each, engraved with someone’s name and imbedded on the Park Pier. Sales are steady with bricks honouring birthdays, weddings, anniversaries, and in memory of those who have passed.

“Our donations come from people of all ages, from people with little money or those with significant wealth. During the original Save The Park Campaign, kids would set up lemonade stands and bring in their piggy banks to raise a couple of dollars for Arnold’s Park, and it led the adults to think ‘If those kids can put in their few hard-earned dollars, why can’t I contribute something more?’ We once got a letter from an elderly lady who said ‘I don’t have much money, but here’s five dollars because as a little girl I used to come to the park. But if you don’t need it, could you please send it back?’”

“We sent it back to her,” Sue smiles fondly. “But we still have that letter!”

Gary Kyriazi is the author of The Great American Amusement Parks, A Pictorial History, and has been a researcher and writer for the amusement industry for 38 years.

Donations to the Preserve Our Park campaign can be made at www.arnoldspark.com. Or, if you know of a traditional amusement park that’s in danger of closing, contact them to see if you can help. Let’s not lose another one.

Pictured below: Sue Richter in the park shop. 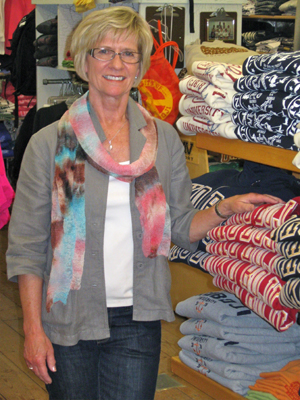