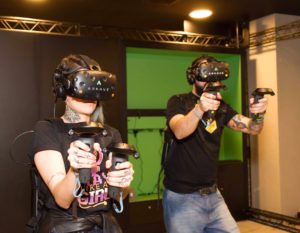 YDreams Global, a designer and developer of augmented and virtual reality experiences, demonstrated Arkave VR, the first turnkey, free-roam room scale multi-user VR platform, at IAAPA 2018 in Orlando, Florida. Arkave VR’s initial US installation will be at Nomadic’s VR centre in the Pointe Orlando Mall, near the Orange County Convention Centre, the venue for IAAPA.

Arkave VR includes a modular set-up of HTC Vive headsets and backpacks; an arena server, and lighthouse sensors, and on-site support for a variety of three-person experiences. YDreams Global’s wave-based alien shooter game, “The Last Squad,” was demonstrated at the Nomadic VR centre.

Recent demonstrations of Arkave VR include Brazil’s Game XP, and the Extraordinary Future and VR/AR Global Summit events in Vancouver, were highly successful, with more than 5,000 users experiencing “The Last Squad,” as well as “Lost Room,” a spooky escape room, and “Snow Fortress,” a snowball fight player-versus-player (PVP) game. Arkave VR will soon be installed in an Arkave VR Centre in Vancouver’s Gastown.