Following the success of Aquatica in Orlando, Sea World Parks & Entertainment has rolled out the waterpark brand to Texas with a multimillion dollar transformation of SeaWorld San Antonio’s former Lost Lagoon.

Representing the largest single investment since the park’s debut in 1988, signature attractions include Stingray Falls and Ke-Ke Reef, along with lush tropical theming and up-close animal encounters. Ahead of the grand opening on May 19, Aquatica vice-president Tim Morrow tells Park World why Lost Lagoon is lost forever.

Why did Sea World Parks & Entertainment choose to roll out the Aquatica brand to San Antonio?

Lost Lagoon was an example of a prototypical steel and concrete waterpark. We really wanted to bring the Aquatica brand to this part of the country and give our guests a waterpark unlike anything else they have experienced – a waterpark only SeaWorld could create.

Prior to beginning this project we conducted focus groups across the state of Texas. Our guests, past, present and future, told us they wanted something different. They wanted a waterpark where they could relax, feel like they could have their own “home base,” be able to interact with animals and experience attractions with their entire family. Aquatica provides all of this.

What changes have you made to the waterpark?

We saved the best elements of Lost Lagoon that could be incorporated into Aquatica, but we have given these legacy attractions new life with Aquatica’s theme. You won’t be able to recognise them when you see them, but they’ll be just as much fun as they were before.

Was there the same level of animal interaction previously?

There was no animal interaction previously at Lost Lagoon! One of Aquatica’s biggest points of difference is up-close animal experiences. Besides Ke-Re Reef, there are bird displays and we will have lots of appearances by other animals for our guests to meet.

What were some of the biggest challenges in making the transformation?

Some of the big challenges were timeframe. We didn’t want to go a summer in Texas without a waterpark so we had construction happening around the perimeter of Lost Lagoon all through the summer of 2011. This allowed us to get started on the project while still having the waterpark operational.

What is your favourite part of the park?

If I had to pick one thing that it would be Ke-Re Reef. There is so much to do at this reef and it is so beautiful. Guests can touch, feed and wade with rays. Then there’s Stingray Falls, which runs underwater through a grotto that gives guests a “face-to-fin” experience like nothing else!

Who were some of the suppliers?

PGAV was our architect on the project. Theming design was through Suzanne Sessions, with Weber Group doing all of our rock work and in-park theming. The building/installation was completed through Guido Brothers Construction. Tubing was provided by Zebec of Canada (Ke-Re Reef), Z-Pro (Wahalla Wave) and Talburt & Associates (Loggerhead Lane and Kiwi Curl/WooHoo Falls). Chairs are provided by Tropitone, whilst Water Safety Products supplied our lifeguard uniforms and water safety equipment.

Are you expecting an increase in multi-day visits and season pass sales as a result of Aquatica?

We believe with two parks at our location we are a true multi-day visit, and have high hopes for the impact Aquatica will have for San Antonio’s thriving tourism industry. SeaWorld San Antonio is huge on its own with lots to do and a challenge to see in one day. Now with the addition of Aquatica you can have two totally separate experiences and easily spend a day or more at each park. 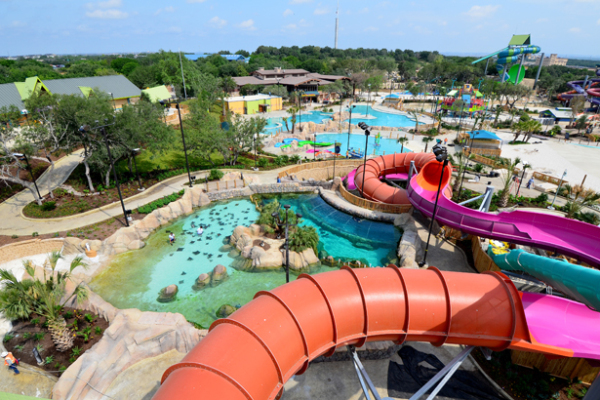 How are you marketing the waterpark to your guests?

We’re putting all of our efforts into promoting the new park, from an in-park preview centre and signage to a fully featured advertising campaign with TV, billboards, radio, print and tonnes of PR. It’s amazing the amount of buzz we’ve been able to create with social media and public relations. Our social and traditional media contacts have shown great interest in the project since we announced it in May 2011.

Can we expect to see other Aquatica properties emerge in the US?

We do not have any other Aquatica waterparks planned at this time, but SeaWorld Parks & Entertainment is always actively seeking ways of extending our brands. Most recently, for example, our company has branched out into movies, home entertainment, television, digital publishing and product licensing.

What else is new this season at SeaWorld San Antonio?

Due to a phenomenal 2011, we kicked off the 2012 season on February 4, the earliest SeaWorld has opened in 20 years. Aquatica is our biggest attraction this year. For that matter, it’s the largest capital investment in SeaWorld San Antonio’s history. We’re strengthening our consumer events line-up this year with a new kids concert series called Just For Kids. We’re also investing more in our established fall events, Howl-O-Scream and Christmas Celebration.

Aquatica San Antonio is designed as a South Seas oasis, with all the luxury and amenities of a beachside resort including terraced pools, expansive sandy beaches and private cabanas – all in a tropical setting.

The waterpark’s signature attraction is the one-of-a-kind Stingray Falls, where guests in four-person rafts come face-to-fin with stingrays and tropical fish in an underwater grotto. Walhalla Wave, meanwhile, is the first clover-tube ride of its kind in North America, featuring a zero-gravity wall.

One of the park’s most exhilarating rides is Hooroo Run, where guests choose single or double tubes for their descent down a 48ft-tall (15m) ride featuring open and closed slides, water curtains and lots of twists, turns and drops. Tassie’s Twisters are a pair of slides, each culminating in a large bowl Additional slides include Kiwi Curl and Woohoo Falls, all by ProSlide.

Walkabout Waters is the name of Aquatica’s 3-storey, interactive water fun house featuring geysers, sprays, giant dumping buckets and spouts. In Loggerhead Lane, guests can hop in a tube, swim, walk or float as they enjoy a relaxing time along a winding 1,200ft-long (365m) water route enhanced by tunnel jets, foam shooters and misters. The avid body surfer can kick it up at Big Surf Shore, a huge wave pool with over 400,000 gallons (1.8 million litres) of water with swells of up to 5 feet (1.5m). Numerous other pools and kids’ activity areas can be found throughout the almost 20-acre (8-hectare) waterpark.

Amongst Aquatica’s multiple animal habitats, Ke-Re Reef will offer guests a chance to see and feed several species of stingrays in a unique tropical reef. Macaws, roseate spoonbills and a multitude of colourful fish will also enhance the park’s atmosphere.

In order to enter Aquatica, visitors must have a SeaWorld San Antonio ticket or pass. A two-park, two-day adult ticket will be available for $79.99 plus tax, or $69.99 plus tax for children aged 3 to 9. A SeaWorld/Aquatica annual pass is available at $129.99 plus tax.