The two Finnish companies have enjoyed strong relations for a number of years and now Lappset, already one of Europe’s biggest playground manufacturers, expects to export more of its product across the globe as a result of the licensing deal with Rovio.

With over 1 billion games downloaded as “apps” since launch in 2009, Angry Birds is the fastest growing consumer franchise of all time, and a big hit with smart phone and tablet computer users. One of Rovio’s goals in creating attractions, other than the obvious financial rewards, is to provide active real-life experiences to Angry Birds fans, and maybe distance itself from the “couch potato” image of the traditional gamer. Already Angry Birds is notable for having a much wider user demographic, in both age and sex, than many other computer games.

At Särkänniemi, Angry Birds Land includes amusement rides in addition to a large playground (as pictured below) and a number of touchscreen-based games featuring unique content. The initial Angry Birds Activity Parks, which will include additional outlets in Finland, many venues in China and also Sundown Adventure Land in England, will not all include rides. The typical installation is cited as 600 square metres. Watch this space! 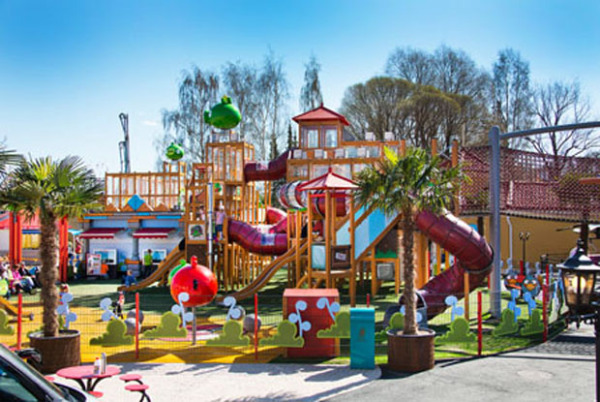