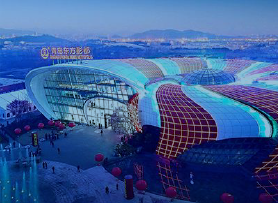 “On one side you have VR and on the other side the magic.” says Alterface CEO and founder, Benoit “Ben” Cornet. “The pressure created by the immersive effects of VR is pushing parks to rely on more sophisticated, slightly less technology intensive media attractions. The attractiveness of mixed-media has been demonstrated by the tremendous success of Disney in Shanghai.”

Erratic, a non-linear mixed-media ride, is another new Alterface launch where passengers can determine the ride’s sequence in real-time. The introduction of choice and non-linearity makes dark rides a compact alternative to traditional rotating platform attractions – which have proven underwhelming to spec conscious FECs in China.

“We see the Chinese market evolving very rapidly and eagerly. After having witnessed the debut of interactivity in the parks, we see now interest in higher quality projects which are more accurate and feature strong concepts.” says Ben Cornet.

Alterface are exhibiting on booth #U203 at China Beijing Attractions Expo from 17th-19th March 2018.