In a short space of time, Allou! has become the number one amusement park in Greece, attracting as many as two million annual guests. Here Hellenic Entertainment Parks owner Dimitri Kontoyiannis, who 10 years ago hadn’t even ridden a log flume, shares his story.

We opened Allou! Fun Park in the Agios Ioannis Rentis area of Athens on October 7, 2002. The whole thing was done at flashlight speed in just 10 months, and required a €42 million ($55m) investment. We have since spent a further €18 million on improvements.

My family’s background is in duty free; then I moved into real estate and development, which has become my main business. I formed Hellenic Entertainment Parks (HEP) with my partners Alexis Aidonpoulous and Lorenzo Freris. As well as the park, we also run a 3,200-seat theatre in Athens, originally used as the Olympic badminton stadium. A few years later, Lorenzo’s food business started exploding and in 2004 he was replaced by a new partner, Audiovisual, which is listed on the stock market here in Greece. That is how we are to this day.

My real estate background helped when we built the park. Athens is a very dense city and it is hard to find big plots of land. There are a few, but they are so expensive that you would never make money operating a park on them. I had already developed a mixed use development in this part of town, including a multiplex cinema, so I knew the potential. We bought the land for a tenth of what you would pay now. When we came in there was no ring road outside the park like there is today, but I felt that it would happen, and by the end of 2011 we will have a Metro station next door to the park too.

We took care of everything around the park, and started planting lots of trees. As a child, I grew up Johannesburg, so we imported real Jacarada trees. They are kind of quirky, and unique in Athens. Alexis brought in an Italian designer and gave him a brief to design a good luna park, and together they chose all the rides. If you asked me before we opened what a Crazy Mouse or Drop Tower was, I couldn’t have told you. I hadn’t even been on a Log Flume. But I did know what a Ferris Wheel was!

There are four guys I treat as mentors, and who were very helpful when we set up the park. Recently we lost our fiend Mauro Ferrari (Preston & Barbieri), he encouraged me to travel and see other parks. Bob Masterson is a good friend, and Mats Wedin (Liseberg) and Nick Thompson (Blackpool Pleasure Beach) gave me the truth about this industry. The truth is everyone is passionate about this business.

People like Sascha Czibulka at Intamin and Henk at Vekoma have been great too, even though we’ve never bought a ride from them. If someone wants to sell you a ride, obviously he wants to spend time with you, but we are talking about so much time it simply doesn’t make sense. We’ve spent many dinners going through things with Roger Houben; what he is doing with 3DBA is totally different, it is fresh.

Allou has two meanings in Greek. Literally it means that you want to go somewhere else, but the slang meaning is that you can be a little high or you are in your own world; it’s escapism. I don’t know many parks that feel like us, with this product mix. Certainly no one opens as late as we do, and no one has such loud music! We want our park to be an entertainment destination, not just an amusement park.

There were two other two luna parks in Athens when we opened, the largest of which was about 5,000 square metres and considered quite big at the time. I think the reason no one had ever done anything bigger was that the people who were already in the business could not get the money, and the businessmen who could have afforded it probably considered it more of a risk than an opportunity.

Being in the centre of Athens is crucial to our success. Around 60% of the Greek population lives in this area and we have two-and-a-half million people within a 20-minute drive. How many places do you get that?

I know people have been to check out the market because of us, but it is an uphill struggle to get a park open here. First of all, they would not find the land. The size of the park we have is very small, even by European standards, so no big group would ever look to do a park on this scale, it wouldn’t make sense.

Our main park is 20,000 square metres, and in 2003 we added Kidom, a 6,000 sq m children’s park across the road. Then we started acquiring more pieces of land and in total today have something like 93,000 sq m of land, split into five different pieces. One of these was an extreme park, until some archaeological remains were discovered, so for the moment it is an excavation site. This happens a lot in Athens!

The Log Flume (La Isla) is one of the most popular rides, and so is the Crazy Mouse. These, together with the “G” rides – the Booster, Air Diver and Slingshot – are probably park’s top five attractions.

Manufacturers know the kinds of numbers we are doing when they see how quickly we order spare parts! It would be nice to have higher capacity rides, but there simply isn’t the room.

To encourage repeat visits, we came up with two seasons, winter and summer, and each year we do two massive events. We started with a Christmas event, which was not very successful at first, but is now the strongest five-week period we have in the year.

Then we have the summer, the first time it was only a month-long celebration, now it starts in the first week of June and continues until the children go back to school in September.

Each year we have a different theme and we introduce something new, whether it’s a ride that stays in the park or something like a skydiving simulator for a limited time only. We complement all this with concerts and DJ sets. Those four months are full of action.

We will be launching another new attraction in June, three slides with a trap door, and we are going to play a little on the financial crisis – “It’s got so bad people are committing suicide at Allou!” That’s how we advertise; we go crazy, we don’t do conventional, but we do advertise hard. We have a very creative department in our park, and the marketing is a very important part of our business. We always have to be hot; we have to be at the edge.

Last summer we did the 4D campaign (see page 27), and previous events have included things like our Shark Summer to launch the Mad Sharx ride. Our TV adverts had the music from Jaws, and then the next year we had people doing crazy things like walking out washing machines to show how fresh we are! Last Christmas we themed everything around snow and ice. Unfortunately we had real snow as well! We also had companies coming in promoting their ski equipment and doing a show.

We bring commercial partners into everything we do. A good example is the partnership we have with Sony Ericsson, where you can buy a ride photo but also download it to your mobile phone for free and send it your friends. It gives great profile to Sony Ericsson, it’s something extra for the guest, and it’s great marketing for us.

Lorenzo’s company, Everest has used the park to test several new food products, including our own own “Allou Sandwich.” We’ve also had big brands like Ben & Jerry’s opening up first in the park. Two years later they opened their first store in central Athens. However, if a parent wants to take his kid out for an ice cream, we are a great place to come, without all the pollution in the middle of the city.

Because we have free entrance and free parking, people can come whenever they want. I believe that when you have a crisis, it’s the best time to focus on quality and service. In Greece the big problems hit the country in October last year, but the crisis started in 2008. We lowered our prices two years ago, and up to now have not felt any major impact. I think that this summer could be our best summer ever.

Fun around the clock

Allou! Fun Park squeezes many hours into its operating day, staying open as late 2 or 3am in summer, and requiring three separate staff shifts. Even the Kidom children’s area of the park does not close until midnight. None of this should come as a surprise to anyone familiar with Greek social life!

Allou also packs a lot of attractions into a small space. At present, the main park is just 20,000 square metres. Main attraction include: 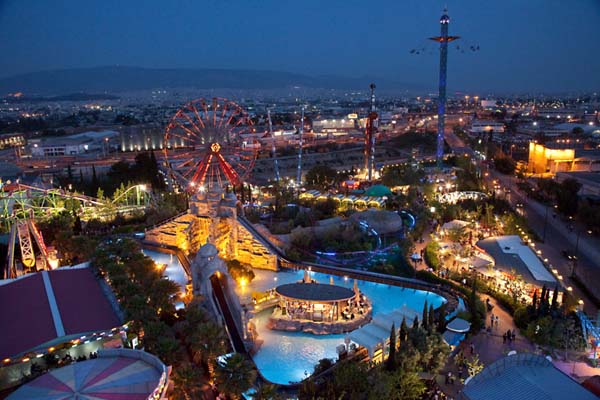 At Kidom there are a wide range of children’s rides, attractions and inflatables including:

Catering is provided throughout Allou by Everest. All games are run-in house. Guests pay for rides using a charge card or wristband.

Allou!’s last big summer event was timed to coincide with the launch of the park’s 4D Gate effects theatre from Kraftwerk/3DBA, and the park embarked on an ambitious marketing campaign to educate the general public about its new attraction.

“The first thing we did was bring in all the journalists,” explains HEP director Dimitri Kontoyiannis. “Instead of doing a normal media day, we wanted to explain what 4D is. Ours is the first in town, but some of the cinema companies are marketing 3D as 4D. We wanted to explain we are the real 4D! Then the advertisements started hitting TV, and Coca-Cola started featuring 4D in their advertising. In the park we had everything based around 4D, it was on our all uniforms, on the signage, the staff wore 3D glasses; we made a real event of it.”

Allou! runs a rotating programme of six films inside a 48-seat theatre, all by nWave. Jett and Jin runs daily until 3pm to cater for younger guests, followed by Panda Vision until 7pm. Haunted House and Haunted Mine both run evenings until the park closes, and are popular with teenagers. Also shown are a couple of seasonal films.

Kontoyiannis says nWave boss Eric Dillens was shocked when asked for so many movies. “Eric thought two would be enough, but you have to constantly change and adapt, especially in a city park with so many repeat visitors. I have to say nWave were excellent, they realised we were testing this method and backed us up with the price. They could easily have sold us six movies and at six prices, but I think we have proved to them that this approach works. This is a great product, and would work well in any city, either in an amusement park or as a standalone attraction with a nice cafeteria attached to it.” 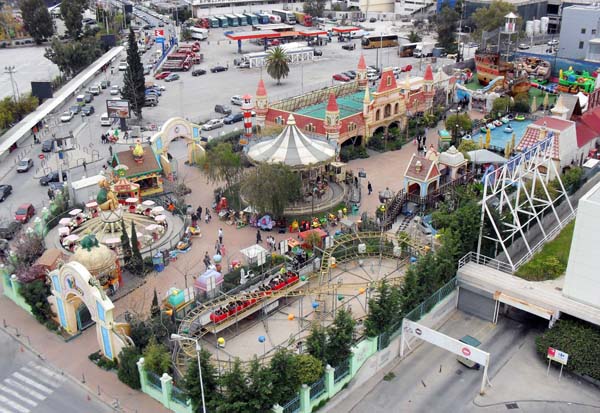