The park that Jack built

n the 1970s, in the wake of Six Flags Over Texas’ success as the first non-Disney theme park, every American market that could squeeze out enough potential patrons saw a “theme park” spring up. The open pastures of Altoona, Iowa, just west of Des Moines, may have been more of a gamble than most, but Jack Krantz proceeded with guts and determination. Gary Kyriazi catches up with his surviving family to trace the development of Adventureland.

Disney historians are quick to point out that when Walt Disney created his 1928 animated short featuring Mickey Mouse, Steamboat Willie, he intended his new film company to be named Disney Brothers, in the pattern of Warner Brothers, which had formed in 1926. After all it wasn’t just Walt, it was Walt and Roy. Walt’s mind was all creativity with little sense of money; Roy’s was just the opposite. The two complemented each other beautifully. However, Roy insisted they stick with just Walt’s name. After all, Mickey Mouse was Walt’s vision, Walt’s dream, and Roy was far more comfortable in the background handling the finances.

Indeed, very few people have within themselves that perfect balance of creativity and finance. John Franklin “Jack” Krantz was one of them.

In Des Moines, America’s farmland, he was the area’s most successful builder of custom homes; successful enough to pursue his dream of an amusement park. He formed a group, Empire Investment Corporation to build what he named (simply if perhaps somewhat unoriginally) Adventureland.

“Jack was always very clear in his vision,” his surviving wife Jan recalls today, “and always able to communicate his vision clearly to others in amazing detail (like Walt Disney). And he knew money, knew how to plan and budget (Roy Disney). On both ends he was very convincing. Besides, there was an entertainment hole here that needed to be filled. So Adventureland happened pretty quickly.”

There certainly was no theme park competition in the area. An old, traditional riverside amusement park in Des Moines, Riverside Park, was gamely hanging on with its old wooden coaster and small collection of classic rides and games, but it was facing the uncertain future of all of America’s traditional amusement parks at that time, particularly when faced with a new theme park in the same market. Riverside Park sadly closed two years after Adventureland’s debut season in 1974. The old wooden coaster was torn down and the other rides were scattered, with the classic Carousel, the Haunted House Dark Ride and Himalaya going to Adventureland. Adventureland quickly managed to grab a local, and regional, following.

“Jack never intended Adventureland to be one of America’s top parks,” Jan explains. “He kept his sites realistic, as a regional, family theme park.” Still, there were some obvious influences, as I saw in Adventureland’s debut year, as Jack proudly gave me a tour of his new park. From the main entrance, we walked through one of the twin tunnels underneath a railroad station, into the Town Square of Main Street USA. ‘I borrowed this from Disneyland,’ he smiled in acknowledgment. Hey, he wasn’t the first to do so: Houston’s Astroworld had its entrance open onto its Main Street when that park debuted in 1967, and Kings Island widened the concept by greeting its guests with International Street in its 1972 opening. Since Disneyland’s Main Street was reminiscent of the towns of Midwestern America, and since Jack Krantz’ Adventureland was actually in Midwestern America, why shouldn’t he do the same?”

Park in the Prairie

What I saw as we strolled the park, may not have been particularly original, but it was indeed filling a need, and the healthy number of guests were obviously having a good time. Physically, Adventureland presented itself as an amusement park in the prairie, dotted with dozens of saplings, which promised to provide shade in the distant future. However, the two live shows I saw were satisfactory, my fried chicken lunch at the Iowa Cafe on Main Street was tasty; the mix of rides was strong, including two steel pre-fab coasters, a Cyclone and a Flitzer, and the park’s number one money-maker, an OD Hopkins flume. “That’s our most popular ride,” Jack pointed out, and then added wistfully, “until we can get our wood coaster.”

Unfortunately, Adventureland’s first year was, as Jan plainly states, “a disaster! Our guests seemed to like the park, and we were encouraged. But then we had a tornado just two months after our opening, and it knocked out the windows on Main Street and much of our landscaping. Well, we couldn’t have people enter the park and the first thing they’d see was boarded-up windows, not to mention the other damage. We had no choice but to close down for the remainder of 1974.”

Undaunted, Jack rebounded in 1975 with Adventureland’s first full season, and it was a success. Two years later a wooden out-and-back coaster by William Cobb Associates, which Jack bravely named the “Tornado,” ramped up and solidified the park’s attendance.

Adventureland had made it, and eventually Jack was its sole owner, as he bought out the remaining investors in 1983 and proceeded as one of America’s few surviving family-owned parks. And, following the golden rule of the amusement industry, “Jack put all of the money back into the park,” Jan states. “He purchased wisely and frugally.” 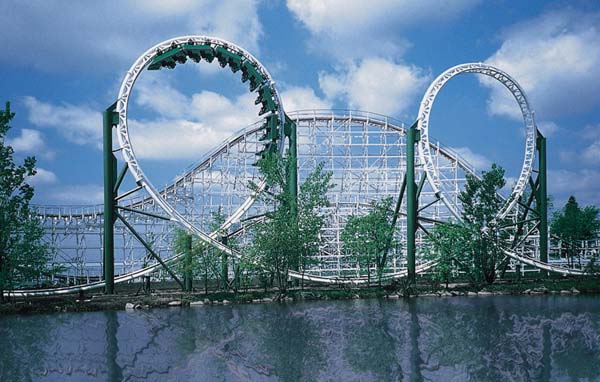 As far as big rides were concerned, Jack avoided what were the two big (and expensive) coaster builders at the time, Arrow and Intamin, and instead bought a double-loop steel coaster from the small OD Hopkins Company in 1990. Three years later he went to another young, upstart company, Custom Coasters International (CCI), from whom he bought CCI’s second wood coaster, and the first to feature designer Mike Boodley’s signature drop-turn.

By this time, what had formerly been the small Iowa farming town of Altoona, Iowa, had grown significantly, as fast-food stops, restaurants, shopping and movie theatres now surrounded Adventureland. Jack was among the first to grab his own park guests when he opened the 187-room Adventureland Inn and the Adventureland Campground. Eventually the entire Adventureland Resort would also offer a waterpark and three swimming pools for its hotel and campground guests.

With Jack’s bold, fast, and continual moves, I asked Jan Krantz if she ever doubted or worried about Jack’s aggression with Adventureland. “Never! He was always totally clear on his vision, both creatively and financially. He had amazing vision for Adventureland, and he could describe it in the finest detail, so that you understood what the goal was. By the 1990s our focus was clear: we weren’t trying to be a Disneyland or a Six Flags park, but a family regional theme park, here in the Midwest. And we’re not teen-driven. We’re not looking to be the ‘biggest and baddest,’ or to add a 30 million dollar coaster, so we don’t have that pressure to add a major ride every year. We try to get a new flat ride every other year, with a major ride less often.”

“Dad certainly had his share of offers,” his daughter Molly Vincent, Adventureland’s advertising director, told me. “But he never gave a thought to selling. My brothers and sisters and I started working at the park as soon as we were able to. We all found our niche, our particular talent, and Dad would groom us in our respective departments. He always said that selling the park would have been like selling one of his own children, and we all share that attitude as well. Adventureland was his dream, and we all wanted to be a part of living that dream and carrying it on.”

Consequently, Jack’s passing in 2006 didn’t stop Adventureland’s momentum; rather, it solidified the Krantz family with his legacy of creative vision and solid business decisions. Today, Jan is the general manager, aided by four of her seven children, one cousin, and some grandchildren as well. As a talented and energetic family, Jack’s strong presence remains. “When we have our brainstorming sessions, we can feel his inspiration,” Jan says. “Still, we have to wing it, trying out new ideas. And whenever we make a mistake, we find a way to make it work.”

One idea was pure genius. There have always been senior citizens and retirees who escape the oppressive summer heat of the American South by migrating north to the midwest. As many of them would park their recreational vehicles at the Adventureland Campground for the summer, the Krantz family created Adventureland’s Work & Camp Program (WRKMPER). It provides discounted camping in addition to regular wages for those who work throughout the park season. Consequently, Adventureland’s seasonal personnel is secured by a core of workers who, unlike college students, won’t be arriving later in the season (which starts in April) or leaving early (the season ends in late September). The WRKMPER’s, in turn, love the camping, the wages, and the moderate temperatures. When the season ends, they pack up and return to their homes in the South.

Strong, inspirational, and solid as a Normal Rockwell painting, the Krantz family has met the 21st Century with the park that Jack Built 36 years ago. “We know what we need to do,” Jan Krantz says. “The family, and Adventureland, are moving ahead.”

Gary Kyriazi is the author of The Great American Amusement Parks, A Pictorial History, and the writer/producer of America Screams, starring Vincent Price, the first book and television documentary on amusement parks. He lives in Arizona and has been a writer, researcher and consultant for the amusement industry for over 35 years. 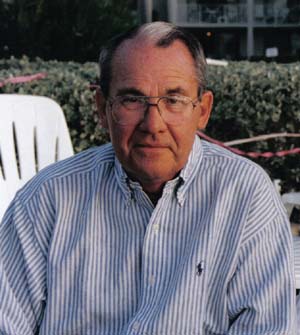