Until now, Twentieth Century Fox has only ever licensed its intellectual property to parks and attractions on an occasional basis. Here Greg Lombardo from the company’s consumer products division reveals why the time is right for the first fully Fox themed park – coming soon to Malaysia.

Opening in 2015, 20th Century Fox World at Resorts World Genting outside Kuala Lumpur will be a MYR 1 billion (US$300 million) project funded by Genting Malaysia, forming part of a wider MYR5 billion plan for the former Genting Highland site. Greg Lombardo, vice-president of global location based entertainment at Twentieth Century Fox Consumer Products, speaks to Owen Ralph about plans for the park.

Why has Fox never created its own theme park before now?

The culture at Fox is interesting actually, we are the only studios in LA that don’t do a public tour, we like it that way and talent that comes to the studios is able to have unfettered access to the creative process without worrying about a tramcar passing by.

I think I was just fortunate to arrive here at a time when Geoffrey Godsick, who is the president of Creative Products, spotted an opportunity. We invest very heavily in the creation of content and then the marketing of that content, but once you are out of the box office window, there are challenges. A theme park is a 365-day a year consumer facing enterprise that provides you with a terrific opportunity to stay in touch with your audience between releases of franchised films.

The 20th Century Fox fanfare and the searchlights are an extremely well known logo and piece of branding, and now we have the opportunity to leverage that brand recognition to create a really great entertainment destination. With properties like Ice Age, Rio, Alien, Planet of the Apes and Night at the Museum we can speak to a pretty diverse theme park audience. I think for the foreseeable future, when you consider the popularity of these IPs in emerging markets, we will be developing this model and moving away from one-off licensed attractions.

There had been an existing park up at the Highlands for a long time. You can spend a decade trying to find a greenfield site, but there was a commitment on Genting’s part to invest the capital necessary to create something of the quality we demanded and which would allow us to create a blueprint and creative concept to share with the rest of Asia and other emerging markets. This afforded us the ability to build the park and not just talk about it for several years, and secondly benefit from the successful operation and critical mass of visitors they have already have there.

They are currently getting between 15 and 20 million guests a year, and the attendance numbers for the theme park are reported to be somewhere between 2.8 and 3 million. They already have 10,000 hotel rooms on site, and as part of the new masterplan they are adding another 3,000. Those kinds of numbers don’t lie; you don’t add hotel rooms unless you have to. Currently a lot of the visitors are day-trippers, and the key demographic for the theme park tends to be teens. Genting is leveraging the relationship with Fox to broaden that base and become a family park and is very optimistic that, with the internationally known properties that we will bring, there will be a substantial increase.

How much of a transformation can we expect to the existing park at the Highlands?

All of the attractions that are there now will go and the site works will level out a lot of the site. Size is an issue with this park, if you make it too big you literally go off the side of a cliff! In creating the new park, we will have suitable canopy cover and a lot of the attractions, being media-based, are going to be indoors. The Highlands are a very attractive destination for Malaysians to go because it’s much cooler up there, but the trade off is that you do get quite a bit of rainfall.

What sort of attractions can we expect?

We intend to create a world class attraction mix. You are going to see anything from trackless dark rides to an indoor coaster and probably a signature rollercoaster, plus many media-based attractions. There will be multiple attractions based around Ice Age and a robust presence of other properties like Rio, Epic, Night at the Museum and even Robots, which was released a few years ago but still has great appeal amongst the youth market there. It will be a single admission park [not tickets/tokens].

Will there be any Simpsons attractions?

Currently in Malaysia there will not as we have a very good relationship with Universal for The Simpsons attractions in Orlando and Hollywood. With the new syndication deal that was announced recently, the future for The Simpsons looks very bright. You are looking at a brand that can come to new markets with 26 seasons of content. The Simpsons certainly plays heavily in our location based entertainment strategy, whether that’s in the existing relationship with Universal or at fresh parks some time in the future. 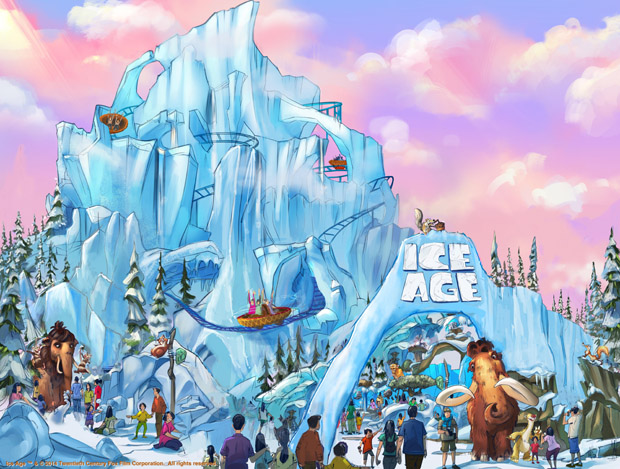