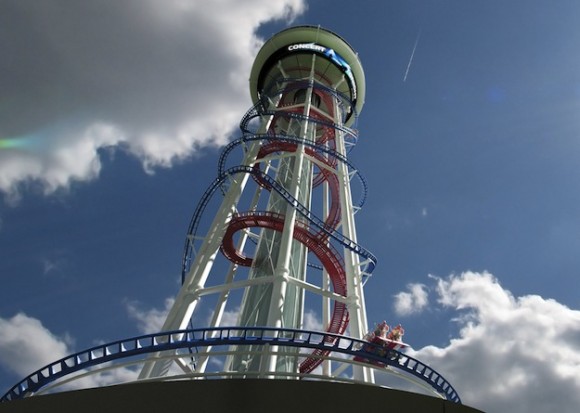 According to US Thrill Rides’ Mike Kitchen, six territories across the United States have been licensed to erect Polercoaster attractions.

In addition to the record- setting 501ft tall (153m) Skyscraper ride at Orlando’s proposed Skyplex development, others are being considered for Atlanta, Nashville, Myrtle Beach, New York, and Atlantic City.

At the start of December, Orange County commissioners unanimously approved the Skyplex plans on International Drive, which as well as the Skyscraper Polercoaster also calls for a drop ride built within the framework of the tower, an observation deck and a rotating restaurant. Approval had been fought by nearby Universal Orlando, citing traffic concerns and the height of tower, which will not exceed 600ft (183m).

Skyplex developer Joshua Wallack has said that construction of the tower would be started first and hopes the complex at the intersection of International Drive and Sand Lake Road will open in 2018 if he secures the required $500 million funding. Wallack Holdings
is also a partner in the 350ft (107m) Polercoaster attraction planned for Atlantic City boardwalk.

Just a few weeks after the Skyplex ruling in Orlando, approval was granted for another tall attraction on International Drive, a 425ft (130m) Star Flyer which will be featured as part of a the new Vue at 360 development from Unicorp, the developer of the existing I-Drive Live site that is home to the Orlando Eye. Universal had also raised objections to the Star Flyer plans.