A 15-minute 4D version of San Andreas from Warner Bros. Pictures will be shown at Gardaland during the 2018 season. Gardaland’s 4D cinema, Time Voyagers, allows its audience to watch the film with enhanced special effects.

After putting on 3D glasses, spectators will feel their armchair hop and move in different directions whilst the clip is projected onto a screen measuring 13 metres in width and 6 metres in height. The multisensorial experience will include helicopter rides, and earthquake and tsunami simulations. 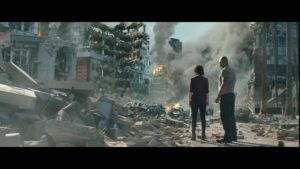 The movement system of the armchair is pneumatic and works with actuators similar to those used for the suspensions of heavy vehicles. Small ducts fixed under the seats at calf level simulate wind and obstacles, and water is nebulised and directed towards the face of the guests, making them feel as though they’re getting sprayed.

Powerful ventilators are positioned on the roof of the cinema, creating air currents, wind blasts, and sounds of storms. Lightning flashes, explosions, and sudden changes of light are produced by stroboscopic lights fixed onto the sky of the theatre.

Time Voyagers uses one projector provided by Cinemeccanica, goggles, polarised filters, and an audio system that reproduces sound effects. The light is powered by a gas-discharged lamp that emits a white ray that, modulated by the projector, illuminates the screen.

The 15-minute 4D version of San Andreas was created by American studio SimEx-Iwerks in partnership with Warner Bros. Consumer Products.

Hologate arrives at The Funplex