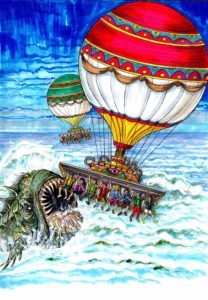 360° Fly Baloon is the theme of 360 Fly Adventure. Is is based on a concept by Valerio Mazzoi and developed by Intamin in collaboration with Project Syntropy and Polimorph. 360° Fly Baloon is the latest version of 360 Fly Adventure that had been already tested with a classic Flying Theatre. But the new version no longer consists of a lifting theatre with a set of lined up gliders. Instead, it has individual vehicles in the shape of an old hot air balloons and a row of seats for eight passengers each. The passengers will take off a few seconds after the boarding checks and begin the experience of a 360° degrees adventure.

360° Fly Baloon uses one of the largest screens ever produced, a state-of-art ride system, and a custom produced movie that will give the visitors a thrilling adventure through erupting volcanoes, monster attacks, and much more. It uses a toroidal shaped screen made of perforated metal. The screen has a horizontal radius of 25.5 meters and a vertical radius of 10.5 meters. The screen height is 16.2 meters and offers a horizontal field of view of 270°. It employs a 20 channel projections system with high resolution of 32,000 pixels by 4,000 pixels across the screen.