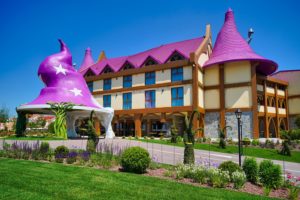 Made of three three-storey buildings, connected one another by Tudor-style loggias which can be accessed from a great golden gate, Gardaland Magic Hotel is characterised by a very particular roof made of 34,000 tailor-made purple tiles.

Magic is the leitmotiv that allowed the designers of the Merlin Entertainments group, of which Gardaland is part, to create a unique and memorable experience. The story acting as inspiration behind the development of Gardaland Magic Hotel sees the Wizard of Gardaland casting a spectacular spell and creating the gigantic and magic purple Wizard Hat, an impressive 14 metres in height and with a weight of over 11 tons. All the magic of the hat flows inside the various rooms and leads Guests into an enchanted reign where they will be welcomed by the Wizard and his fantastic creatures.

“Planning a hotel inside an Amusement Park is a very different task compared to getting a traditional one built” – affirms Edward Neville, Creative Lead Hotels & Accommodation MERLIN MAGIC MAKING – “The hospitality solutions of an Amusement Park must be able to lead Guests into a wholly different world – stimulating their imagination – all the while supplying them with services and standards which have come to be expected when dealing with a first-rate hotel.

This type of hotel must also boast a background story – such as the magic-based one of Gardaland Magic Hotel – which can be experienced throughout every detail, in every corner of said structure, in the rooms, in the corridors, in the lift, inside the reception or at the coffee bar.”

The atmosphere inside is instantly recognisable as typical of an old castle, with enormous books piled up, scrolls with magic symbols, climbing beans plants, distorted watches, a great golden key… and the Magic Mirror in the middle. We are talking about an enormous magic mirror supported by a structure covered in big crystal splinters with white and azure reflections. A look inside the mirror will be magically met by the appearance of the Great Wizard who – with the unmistakable voice of actor and dubber Carlo Valli, the famous Italian voice of Robin Williams – will be telling Guests about all the magic secrets and memorable experiences they will enjoy at Gardaland Magic Hotel.

But the real enchantment are the 128 rooms made after the three different magic realms – Enchanted Forest, Magic Ice Castle and Great Wizard – where memorable experiences can be shared by the whole family during the course of one or more nights.

All rooms are divided in two different areas: one with a double bed on one side and one with two single beds on the other side, allowing the whole family to experience in maximum comfort an enchanted and marvellous stay.

Every detail has been carefully studied to make the experience as compelling and as realistic as possible: around one thousand ice stalactites, over 30 enormous shields and more than 60 large swords, hundreds of flying books and over 30 wizard hats, more than 40 gigantic three-dimensional trees and almost 90 coloured mushrooms, all specifically made and installed inside the rooms to create, with the aid of convenient paintings, a great scenic effect.

In the Foresta Incantata (Enchanted Forest) rooms guests will be feeling like inhabitants of a magic forest; every detail of the room – from the giant tree overlooking the double bed to the three-dimensional climbing plants decorating the corners and colouring the walls, from the log-shaped bedside tables to the colourful giant mushrooms behind the single beds – is part of a fantastic woodland setting capable of involving the entire family.

The Cristallo Magico (Magic Crystal) rooms can instead offer the opportunity to spend the night immersed in a fantastic reign of ice, where everything is a reference to a magic winter: imposing stalactites and a great crown dominate the double bed while an enormous shield and two large swords overlook the children’s beds. The atmosphere is made even more magic by backdrops with magic skies boasting infinite pastel colours and by winged unicorns and flying dragons decorating the walls of the room.

Inside the Great Wizard room, where the sloping ceiling and the suffused lights make you think you are in a mysterious attic, Guests will have the opportunity to sleep inside the fascinating House of the Wizard. The wall behind the double bed is decorated by the gigantic purple hat and by shelves loaded with ancient books while the night zone reserved to children will amaze with ancient flying books and particular lanterns eliciting sweet dreams in the minds of the younger ones, where they will turn intro apprentice wizards..

Once inside the enchanted world of choice, with its themed rooms full of refined details, younger and older Guests will be involved in a fun game of riddles that will make them be part of an out and out magic experience.

In order to make everything magic, transfer within the hotel included, every detail has been themed: the lift taking to the various floors is themed after the Great Wizard room, while the corridors are decorated in accordance with the theming of the different rooms.

Morning access to the internal restaurant, where breakfast is served, is through a door resembling the log of a great tree. The restaurant is called Quercia Magica Coffee Bar (Magic Oak Coffee Bar), where everything looks like an enchanted forest: from the green flooring, resembling a fairy-tale wood clearing to the immense and swirling bean plant, the giant mushrooms and the wood of the counters.

A live Kitchen spot and a rich buffet are available to Guests in preparation for an exciting day at the Park. Quercia Magica Coffee bar remains open all day long until 11 PM, for snacks and aperitifs.

Completing the live entertainment and exclusively for Guests of Gardaland Magic Hotel there will be a “full immersion experience”, in the Quercia Magica Coffee bar, an experience bringing together magic and technology: younger Guests, equipped with special viewers, will be catapulted in the Laboratorio del Mago (Wizard Lab) where they will be able to learn all the secrets of his potions and his spells.

Starting from July the Hotel’s garden will also be playing host to Gardaland Magic Walk: thanks to their viewers, Guests will find themselves in an enchanted world among suspended magic islands and magic creatures, where walking over the clouds they will have the task of collecting stones and potions to help the Wizard of Gardaland fulfil his dreams.

Gardaland Magic Hotel – immersed in the vineyards of the Garda Lake – is located near the other two Hotels of the Resort – Gardaland Hotel and Gardaland Adventure Hotel – sharing with them a vast aquatic area where to relax after a day at GARDALAND PARK or Gardaland SEA LIFE Aquarium.

A stay at Gardaland Magic Hotel will be, for children and their families, like one big journey into an enchanted realm that will extend their visit to the Park, turning it into an uninterrupted, immersive experience. A unique and surreal location where they will be travelling with their fantasy, enjoying the amazing kind of fun that Gardaland always has and always will offer. In other words a MUST DO to be programmed for the year 2019!