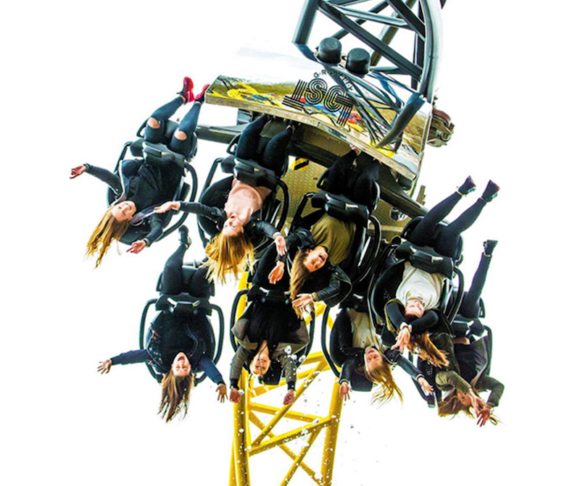 It’s over a decade since Walibi Holland last added a rollercoaster, but this season the park in Flevoland has unveiled an eye-catching new construction from Mack Rides that is sure to keep all adrenaline-hungry guests happy.

Lost Gravity is a thrill ride,” notes park CEO Mascha van Till. “A meteorite hit the earth in Walibi Holland and the impact caused a rare sort of gravity loss, which you can already see and feel when in the waiting area of Lost Gravity. On the ride, the G-forces you feel (or don’t feel) give you a chance to experience how it feels to be in a place without gravity. The ride contains intense corners, a maximum amount of airtime and two mind- blowing inversions.” 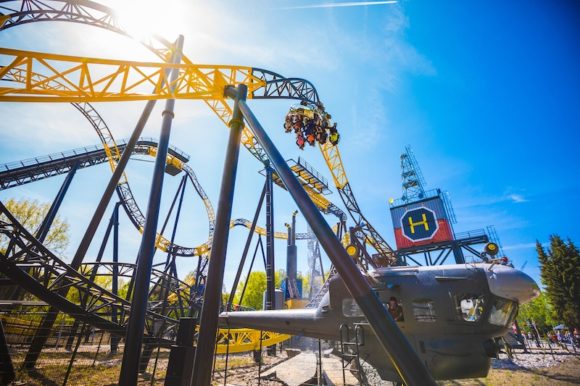 While it may be somewhat disorientating, a ride on Lost Gravity is certainly not uncomfortable, as van Till continues: “The coaster is very smooth and especially the way you are secured is unique. Because there’s only a restraint on your hip you are feeling a freedom that’s tremendous!”

Up to 800 riders an hour can enjoy the experience sat inside one of four single cars, restrained only by the hip. Featuring a completely new design by Mack, four of the eight seats in each car overhang the track in wing fashion. Yet this is not a wing coaster, insists the manufacturer, which has given it the catalogue name of Big Dipper. 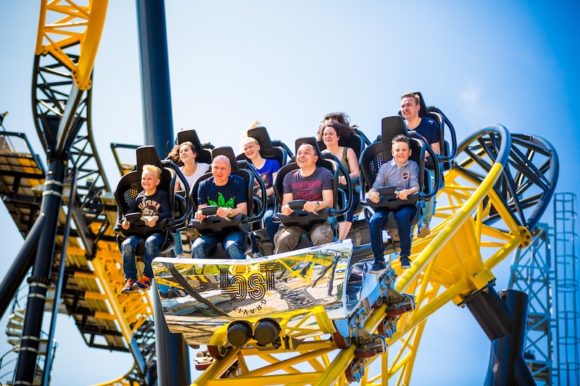 “The brief from Walibi was to create the most fun and thrilling experience in
what is quite a tight space,” reveals Maximillian Röser, heads of marketing at Mack Rides. “Lost Gravity occupies a 92 x 43m footprint and includes sharp turns, inversions and airtime. With the short cars we can manoeuvre through very tight curves, and so the pacing of the elements is much faster. Also we decided to give the riders in the outer seats the floorless feeling not just with higher seats but also seated next to the track. With this and our well-known lap bar restraints, the ride feels great in every single seat. The first drop in particular is amazing in the outer back seats where you experience a lot more motion than in the middle seats.” 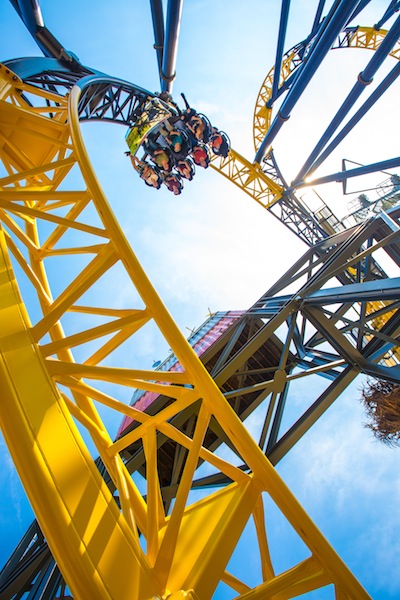 The new attraction, which Mack signed off in November and was opened to the public in time for Easter, is the first new rollercoaster arrive at Walibi Holland since the green- tracked Intamin steel coaster Goliath, which debuted in 2002 during the park’s five year spell as Six Flags Holland. Other rides, such as the Vekoma launch coaster Xpress: Platform 13, have been given revamps in recent years, but still Walibi guests have had to wait until now for a completely new rollercoaster experience. 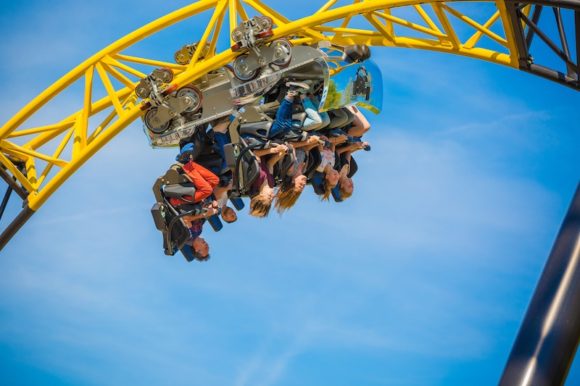 “In the previous years we invested in the renewal of Walibi Village,” explains van Till. “We now own a very good looking holiday park which can prolong and complement the stay of our guests. After this project was finished, we thought it was time for a new rollercoaster.” 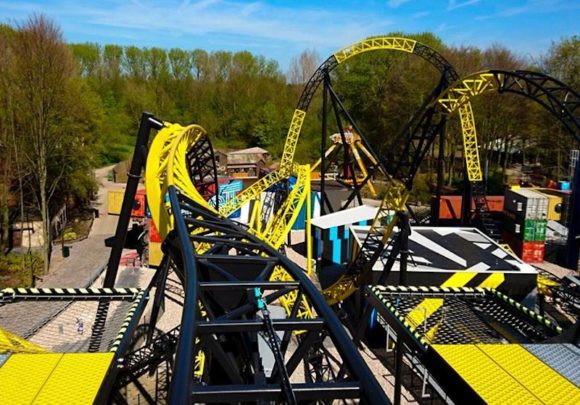 The park’s CEO reveals that four different proposals were entertained before a shortlist of two suppliers was drawn up, Mack becoming the manufacturer of choice thanks to the number of elements it managed to pack into the Lost Gravity layout. It probably helped too that the German company is also supplying a new water coaster (Pulsar) this season to Walibi Belgium. Several other contractors were involved in building and installing the ride, including RCS GmbH (Rollercoaster Construction Services). 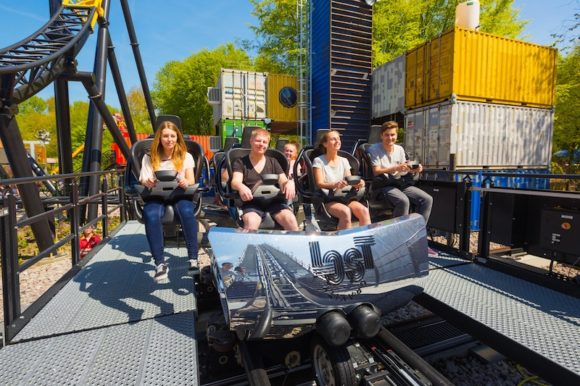 Occupying a 92 x 43m footprint, Lost Gravity sits in the Zero Zone of Walibi Holland, close to the park’s Western area. The season continues until October 30, culminating with the popular Halloween Fright Nights period, during which a new haunted house will be unveiled. Walibi Holland is located in Biddinghuizen, part of Flevoland, a province of the Netherlands north of Amsterdam formed from reclaimed land.

Business so far this season has been okay, says Mascha van Till, but could have been better were it not for bad weather at the start of spring. Asked what the park’s goals are with the addition of Lost Gravity, she replies simply: “More visitors!” You can’t say fairer than that. 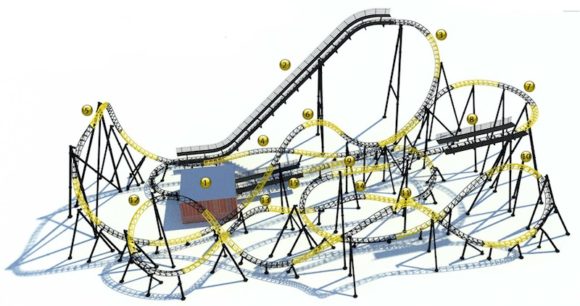 11 moments of madness
Featuring 680-metres of track in alternating sections of yellow and black, Lost Gravity features 11 key ride elements. These together with the brake sections and other features are highlighted in the drawing opposite, provided courtesy of Mack Rides:
1) Station
2) Lift hill (32m)
3) Twisted drop
4) Airtime hump
5) Banked top hat (120°) 6) Airtime hump
7) Outside banking
8) Block brake
9) Dive drop
10) High banked turn
11) Zero G roll
12) Inclined dive loop 13/14) Airtime hump
15) Final brake
The coaster’s top speed is  87km/h and maximum and minimum G-forces are 3.9/-1.1.
All that action is packed into just 45 seconds, although the ride boasts a total estimated cycle (including loading/unloading) of almost 2.5 minutes. To enjoy the attraction, Walibi Holland guests must be a minimum of 1.3 metres tall.