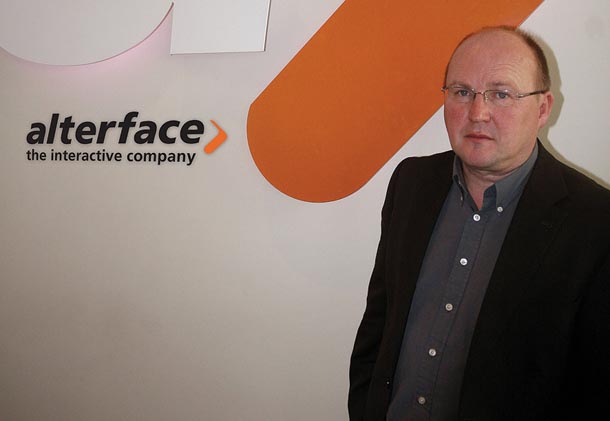 From its roots within the Université Catholique de Louvain in Belgium, Alterface has developed into a leading supplier of interactive technology for the theme park and attractions industry. As well as pioneering products such as the 5Di interactive theatre and interactive haunted house, the company has also helped ‘democratise’ the interactive dark ride with its innovative control technology.

How did the company begin?

The founders of Alterface were Xavier Marichal, Alok Nandi and myself. At first it was a ”research animal” – you develop something that looks promising even if it is not completely clear what will be the final purpose …a typical European research project!

We started out working with gesture recognition, Chroma key technology without the “green screen.” Somebody is filmed standing in front of a screen and the position of the body detected so his image is “injected” into the video flow and he can interact with the content. Ten years ago this was really the leading edge of detection technology and we still have systems operating today, however its weakness was the throughput because you can only have two people in front of the screen at one time.

Our initial market, museums and science centres, proved very difficult to conquer. It was therefore time to look for a more suitable product that we could turn into a sustainable and profitable business. We made some changes to the management team and started looking to the amusement industry.

Focusing on group interaction, we started in France with an earthquake simulator, followed by an interactive dome. Then came Desperados, which was the beginning of the interactive theatres. It was also around this time that our paths crossed with Roger Houben from 3DBA, with whom we started a very fruitful collaboration that is still in force today. 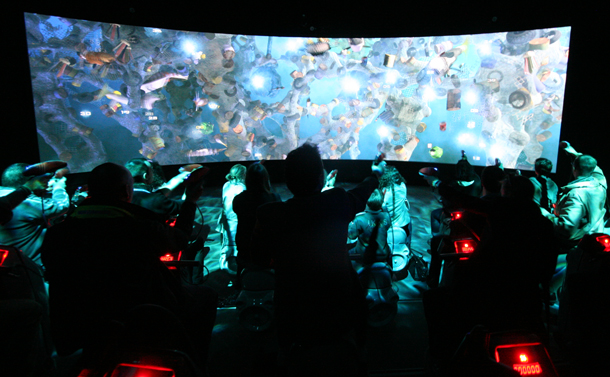 What was the concept behind Desperados?

The idea was to create an arcade game for the whole family but really work on the interaction and make it more like a show, with a host who teases and encourages the players. That is how we came up with things like pictures of the players on screen together with their scores. We wanted people to interact with the others in the theatre, unlike a video game where there is no sense of being together.

That was really our initial focus – and still is. We don’t go for personal products anymore, we believe that nine is the minimum amount of players you can reasonably have to get the right dynamic, the larger the better.

Was the industry ready for such technology at the time?

Not at all! People were scared about using technology, they complained about the cost and reliability of PCs and projectors, but now things have evolved and I don’t think that is an issue any more. I see Asia as being the early adopters of technology, then Europe, and then America; it takes a long time to get to America.

The success of 3D has shed some light on the kind of thing we do, however the fact is almost everyone has a 4D cinema. We believe that you need to find something new, which is where we are coming from with the interactive theatre. What some people don’t understand though is that it is a complete science. Everyone thinks they can do something interactive but there are a few unwritten rules and it is very frustrating when someone does something that does not work.

But we have good news for the 3D/4D cinema owners as we have just introduced a ‘plug and play’ upgrade to turn any cinema (or simulator) into an interactive powerhouse.

What is your definition of ‘5D’?

3D is the stereoscopic images on the screen, 4D being the special effects in the room or in the seats, and 5D is the motion seats like in the interactive theatre; that’s how we see it. We don’t go above 5D. I’ve heard that there are people planning 6D and 7D, but this industry is full of bad marketing – people will say anything to be different!

How can theme parks ensure they stay ahead of 3D in movie theatres and home entertainment?

First of all there is the family experience. Video games are for teenagers, and I believe the whole family interacting together is something significantly different to what you can get at home. Large screen, high definition content, special effects in the room and a seat which is moving in an appropriate way (no need to shake them like a coconut tree!) are all elements that you can only really appreciate in a park.

People try things out at the trade shows or other parks and are thrilled – “I want it, I want it” – so they buy it, but they forget to do the outside marketing; they just put a sign outside the attraction that says “Interactive Theatre”. Then nobody goes in. Why? Because it looks boring, why would you? This is common of course for all indoor activites, from cinema to live shows, but we are working a lot with our clients to explain how they can market the attraction properly.

Is there much scope to merge ‘real life’ attractions with online experiences?

Little by little we are trying to link the attraction on site and online. For example images taken in the theatre could be seen online and put on Twitter or Facebook. We are also exploring the opportunity to enjoy an attraction at a park while playing against someone else on another continent. In gaming they call this “LAN parties.”

What is the future of media content for your attractions?

We are getting more and more into games development, working with third party developers to offer real time gaming software and pre-rendered content. We want our platform to become the reference for on-site gaming and we see very pleasant development in that respect.

Our platform is compatible with the leading game engines (programs used by developers to produce multiplatform products) such as Unity, CryENGINE or Unreal. We offer developers a virtual 5Di interactive theatre so they can try their content on there.

The developers can come from France, Bulgaria, Dubai, China; it’s quite important that we shop around to get the best content. We used to do it all ourselves, but you can never be truly universal, so if we are doing an attraction for a Japanese client it makes sense to get content from Japan. 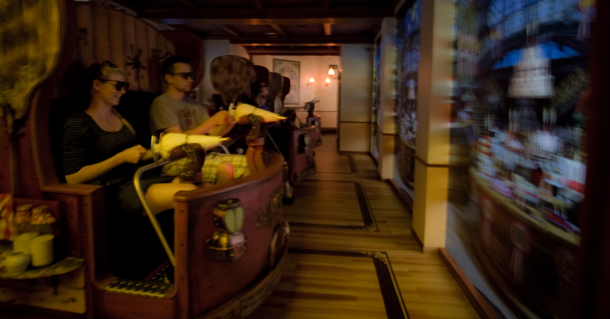 What interactive dark rides have you worked on recently?

The main projects this season were Huntik Secrets & Seekers at Rainbow MagicLand in Rome and Maus au Chocolat at Phantasialand in Germany. Maus au Chocolat has a real family component. These are really big projects, with no concessions to quality and user experience yet the cost of technology has come down so much they were still only something like one tenth the cost of rides like Spider-Man and Toy Story Mania.

We have also done the interactive technology for all the Legoland Discovery Centre dark rides, Reset at Mirabilandia, a dark ride in Russia, Kazakhstan, all over the place. There will be a significant amount of dark rides coming up in the next few months, mainly in America but also in Asia.

What next for your interactive haunted house (The House)?

In the next months there will be a new “House” in America. It will be based on the same concept as the one in Branson, Missouri, and Tusenfryd (Oslo) with the spinning platform and interactive technology, but further enhanced with a pretty sophisticated pre-show, a completely new game and a new design. 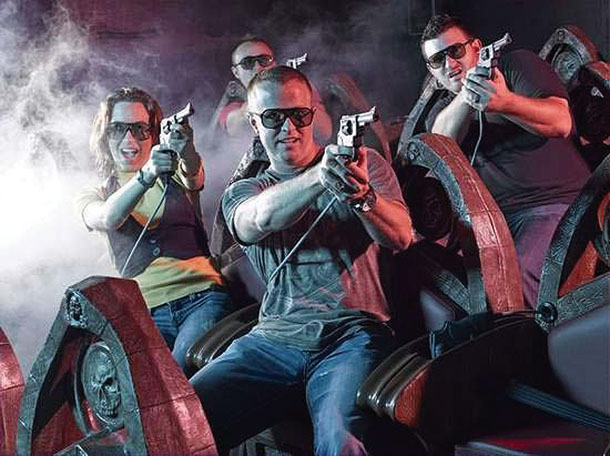 At the heart of rides as varied as Huntik Secrets & Seekers, Maus au Chocolat and Legoland Discovery Centre’s Kingdom Quest is the same ‘Salto’ interactive technology.

Alterface’s wireless show control software, which can also be used for walk-through interactive attractions, controls everything from the behaviour of the ride vehicles to light, sound and interactive effects. The system can even distinguish between live or screen-based targets, and so choose to deliver a laser beam or other shooting effect.

A new ‘eagle eye’ feature, now supplied as standard, instantly logs information about ride activity. “We can tell for instance,” explains Alterface CEO Benoit Cornet, “that in scene six there is a person with a strange shooting pattern. This early warning sign can tell the operator there might be something to watch out for.”